Smartphones comes in all sizes, even though they all share the similar rectangular shape for the most part, but not all devices are created equal. Perhaps one of the most important features of a smartphone is the display, and many people look for a smartphone that has a decent screen to overall body size ratio. That is, some people pay attention to how much of the device itself is made up of pure screen.

It turns out, there’s a handy chart that shows what percentage of the front of a smartphone is made up of the screen. The chart, from @somospostpc, lists many flagship phones, including the iPhone, but unsurprisingly, Apple’s device isn’t even close to the top of the list. 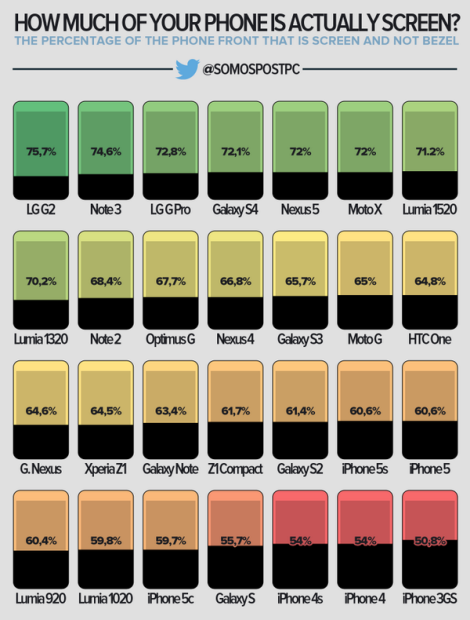 Coming out on top is the LG G2, with an impressive 75.7% of the front of the device made up of pure screen, thanks to the impossibly-thin bezels. Rounding out the top five are the Samsung Galaxy Note 3, LG G Pro, Galaxy S4 and the Nexus 5.

Surprisingly, the Nokia Lumia 1020 is near the bottom of the list, with only 59.8% of the front being just screen. Of course, it’s a big phone to begin with, so we’re not completely surprised by that. Other smartphones at the bottom of the list include the original Samsung Galaxy S, Galaxy Note, Galaxy S II, and the Galaxy Nexus — mostly older devices.

The chart is very telling in the sense that Apple is behind on making its devices more “bezel-less.” While the iPhone 5s is a great phone, the thick bezel is something that a lot of people despise, including myself. However, the rumored iPhone 6 might be Apple’s chance to deliver a device with a larger screen and thinner bezels. We’ve already been hearing reports about a larger screen on the iPhone, and we wouldn’t be surprised if Apple kept the overall size of the device as small as possible by getting rid of the thick bezels.