Microsoft shocked the world when it unveiled its Surface Pro 3 convertible earlier this year with its thinness, powerful processor and good looks. Its launch price tag also shocked the world, costing $999 for anyone wanting to pick up the 2-in-1 computer. Now the company is finally selling the other variants of the Surface Pro 3, pushing down the entry-level cost of the device to just $799. 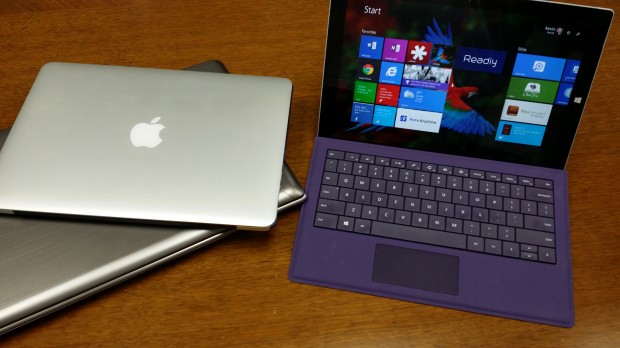 The Microsoft Surface Pro 3 effectively replaced a Windows 8 laptop and a MacBook Pro.

Microsoft first announced a Surface Pro 3 with 64GB of internal storage and an Intel Core i3 processor along with the Surface Pro 3 that it’s been selling for around a month. This new variant of the Surface Pro 3 costs $799 because it’s a bit less powerful than the $999 version. It also has less storage meaning buyers won’t be able to keep as many pictures, television shows and home videos on it as they would other Surface Pro 3 2-in-1s.

This cheaper Surface Pro 3 couldn’t come at a better time for Microsoft or potential buyers. Today marks the official start of the Back to School shopping season. Many local school districts head back to class this month and parents are going to be looking for a new personal computer that the entire family can use to browse the internet on and create projects. It doesn’t hurt that some states are even holding tax free weekends, making it the best time to make an expensive school-related purchase like the Surface Pro 3. Joining grade school students in classrooms around the country are college students. This new cheaper Surface Pro 3 could be the machine those students are looking for.

Every Surface Pro 3 comes with a 12-inch high-definition display. With a keyboard accessory, the Surface Pro 3 might look like a laptop, but its touchscreen allows buyers to use it as a way to stay productive or enjoy some downtime. There’s a single USB port too. That means users can just print documents without the hassle that printing from an iPad requires. A pen allows users to navigate Windows 8 and instantly take notes in Microsoft’s OneNote app.

Buyers of Surface Pro and Surface Pro 2 tablets had a hard time typing with the Surface Pro’s covers in their lap. Microsoft addressed that issue by adding a row of magnates that allow users to lock their Surface Pro 3 Type Cover into place. The Surface Pro 3’s kickstand can now adjust to just about any angle too, fixing a huge issue that kept the first two Surface Pro 2-in-1s from being usable in all situations.

The Surface Pro 3 is available locally too. Best Buy is now showing stock in many of its stores. Microsoft’s own retail stores also sell the 2-in-1.