Some readers of GBM will remember in my previous incarnation here that my lovely wife, Thomasin Savaiano, would assist me when I was checking out new gadgets by allowing herself and her reactions to be videoed. Thomasin is not a gadget geek by any means and her reactions are responses that I’m sure many approaching a new gadget for the first time might have. She doesn’t have the terminology down. (What’s a bezel?) She doesn’t care about specs.  She has lots of questions, and well, these video experiences are usually as entertaining as they are informative. Well, I’m back on the pages of GBM, and so is Thomasin. In this series of four videos you get to watch her explore a Microsoft Surface 2 for the first time. This is truly a virgin experience here. 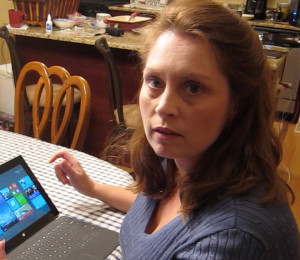 For some context, Thomasin is a Windows user primarily. Her current device of choice is a Toshiba NB305 Netbook running Windows 7. I can’t pry that thing out of her hands, she likes it so much. She does own an iPad mini, which she primarily uses for reading. Thomasin is one of those many users that fall into the category of doing email, some document creation, and using a device to watch videos. While I picked up the first edition Surface RT Tablet last year, she never touched it once. In fact, she doesn’t seem to even recall that we had one in the house.

So, she’s coming at both the Surface 2 and Windows 8.1 for the first time. In setting up these videos I had no idea how she was going to take to the form factor of the Surface 2 or, for her, the newness of the Windows Metro interface. I have to say, I was quite pleasantly surprised at how it all turned out. You’ll need to watch the videos to see what I’m talking about, but suffice it to say, Thomasin’s first time experience shows that picking up a Surface or Windows 8.1 device isn’t that daunting an experience to get yourself started.

Also, I prefer Microsoft’s Touch Keyboard as opposed to the Type Keyboard. I was equally surprised, given that Thomasin is quite the typist on a full keyboard, that she enjoyed the Touch Keyboard typing experience as much as she did.

Part 1: Checking out the Device, the Keyboard, and Microsoft Word

Part 2: Checking out IE, more Touch, and copying and pasting

Part 3: Checking out Excel and Gmail in the browser, and using the Surface 2 without a keyboard

Look for my review of the Windows Surface 2 later this weekend.