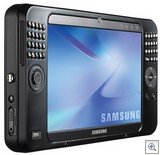 I finally got my hands on the Samsung Q1 Ultra that the team has been passing around. This one has been around the globe all the way to my mate Hugo Ortega and now it is back stateside. I’m going to spend the weekend giving it the once over but here are some early impressions.

I’m going to have to completely retrain my hands in order to work with this device. Everytime I pick it up, my hands grab the areas that contain the splilt keyboard.

Useless in my opinion.

The Ultra does feel lighter than the Q1P. It also feels cheaper. The plastic case just doesn’t have the same quality feel of the Q1P.

This has always been one of my bugaboos of the Samsung UMPCs. I much prefer the navigation options on the Asus R2H. Samsung has added an on the bezel mouse control, but it my early hands on testing it is a poor implementation as I can’t seem to find the right touch to use it effectively.

I have less Ink vectoring issues with the Ultra than I do with the Q1P although the problem is still readily apparent and problematic for me.

I want to give big KUDOS to Samsung for including not only a Vista OS disk but also a separate disk that allows you to select which of the utilities, drivers, and ancillary programs you wish to install. Hugo had wiped the device clean and installed XP. He put the Vista OS back on it, but not the drivers. (No complaints, mate.) I popped in the Driver Disk, made my selections and the install happens. Very slow n a USB drive, but nonetheless it is a pleasure and a reassurance to have this option. Asus also does this. Both of these (and other OEMs) that provide OS and driver disks in this way are too be commended. Those OEMs that don’t should force their CEOs and bean counters to reinstall their systems daily.