A group of criminals in China scammed Apple with fake iPhone parts to assemble over 100 real iPhones which the group sold at a large profit per phone according to news reports out of China.

Fake iPhones are nothing new in China, where a counterfeit iPhone salesman was stabbed to death in 2012, but the latest plot targeted Apple and not unsuspecting consumers.

According to a report in TechWeb by way of TechInAsia, a group of five scammed Apple by sending fake iPhone 4S parts to the company as defective then assembled iPhones with the new parts and sold them to consumers. 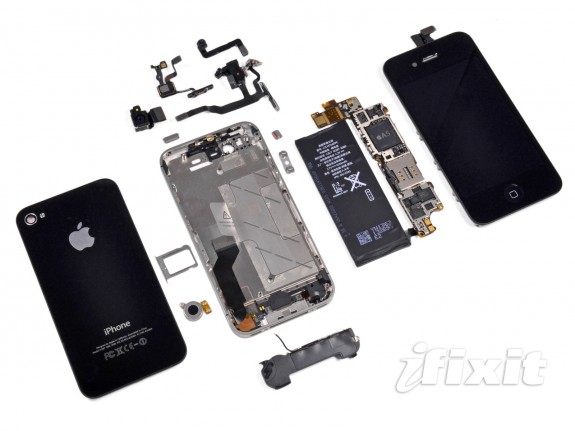 iPhone 4S parts from iFixit, show some of what scammers allegedly returned fake parts for in China.

The group ran the scam on Apple for at least a month, returning 121 fake iPhone BAND parts in exchange for legitimate parts. TechWeb describes this part as the ‘core’ of the iPhone. With a legitimate iPhone 4S Band, the crew could add a battery and the back cover of the iPhone and sell it as a real iPhone 4S for a tidy profit.

The estimated value of the iPhone 4S band parts is nearly $60,000, about $480 a piece based on the estimated market value.

Once the legitimate iPhone 4S part arrived, the group could add the battery and cover for around $161 and then sell the device at full value to Chinese consumers.

Apple reportedly discovered the issue in January, but it took police until April to make arrests of five individuals in the group, which allegedly include an Apple phone dealer, engineer and others.

Apple faces a tough market in China where the company was under fire for warranty practices. Tim Cook publicly apologized to users in China, offering a more robust warranty program. A portion of the translated apology is below, the rest is available on Apple’s China page.

In the past two weeks, we have received a lot of feedback about Apple in China repair and warranty policy. We are not only a profound reflection on these views, together with relevant departments to carefully study the “Three Guarantees”, and also look at our maintenance policy communication and combing our management specifications of Apple Authorized Service Provider. We are aware that, due to the lack of external communication in this process and lead to the speculation that Apple arrogance, do not care or do not attach importance to consumer feedback. We express our sincere apologies for any concerns or misunderstandings this gives consumers.

Apple is rumored to be working on a cheaper iPhone to launch soon after the rumored iPhone 5S which could find a home in Asian markets where the consumers may not be able to purchase a full price iPhone 5 or iPhone 4S.