Christian Falch knows what it is like to be on the bleeding edge with Tablet PCs and mobile technology. Take a look at his Life With Ink in Norway.

My first encounter with mobile computing was back in 1998 when I got my first Palm Pilot. I was instantly hooked on using a pen to interface with the device, and quickly became an early believer and mobile computing evangelist, keeping track of my contacts, calendar events and even taking my meeting notes on my Palm.

After these first experiences with mobile technology, I got interested in finding ways to make use of these small computers in both my work-days and my private life, and that has lead me to spend the past 6 years with laptops, PDAs and Smartphones as my primary devices.

Working as a professional software developer, I’ve often felt that I’ve chosen a tough path to go by.  Being a heavy user of tools for software development like integrated development environments, web and database servers, running on small and underpowered laptops has often been a challenge. Since I’ve been running my own company for a long time (not any more), I’ve spent a lot of time working from remote places. I can’t count how many times I’ve been working from our cabin by the sea, connected using GSM, GPRS, EDGE or UMTS. I’ve had a ton of different cell phones, my last one is a Nokia 6680 which I’ve had for a long time even though I’m not especially satisfied with it, mainly because it’s a very slow device.

When I first read about Tablet PCs, I didn’t really catch the advantages of the concept. I thought it was for people with special work-related needs. After following the news and reading about other users’ experiences, I decided to take a closer look at the technology. I read all I could find about it, following Eric Mack’s blog in particular. When I finally decided to go for a Toshiba Tecra M4, I was confident that I’d made a great choice.

After receiving my Tablet PC, I quickly understood that becoming a YABHTU would be hard for a Norwegian. The computer had no support for Norwegian handwriting at all, even though the Tablet PC operating system was in Norwegian! I got used to changing the input language whenever I wanted to use ink, and realized that I had to live with performing those extra clicks with the pen, Some of the software utilities I read about on the net and hoped could be usable for me didn’t even work because they didn’t find a suitable recognizer for the current language.

Probably because of the above mentioned disadvantages, Tablet PCs haven’t become very popular here in . Frankly, I haven’t met anyone using a Tablet PC here. On the other hand, since I always bring my Tablet PC to meetings, people pay a lot of interest when they see what I can do with my Tablet PC like taking notes and saving small drawings directly in the meeting. They’re always very impressed when I let them write something in Ink and then ask the Tablet PC to translate it to text.

My biggest issue with mobile devices has been power consumption. Stronger processors demands more power, and as some of you already know, I’ve been quite busy finding ways to make my computer use less power, which in turn produces less heat, and gives me longer battery-life.

Since I’m a developer, I’ve always spent some of my spare time creating small programs and utilities that solve day-to-day problems. I’ve uninstalled all the extra software (crap-ware as some say) on my Tablet PC, which means that my task-manager doesn’t show more than one or two processes written by Toshiba. By turning of the services I don’t need and by removing unwanted programs, I’ve reduced the list of running programs on my computer to approx. 50 before launching programs like my email client, web browser and development tools.

I’ve also replaced the Toshiba Power Management software with a little program that I wrote in Microsoft .Net. The software uses undocumented APIs from Toshiba to control the cooling method and brightness of the screen. I’m running this together with a program called Notebook Hardware Control that changes the speed scheme for the CPU and can control the voltage used to power the CPU. Together with a new battery that now occupies my slim-bay, I now have a computer that almost never gets too hot to work with, and that never runs out of power when working without my AC adapter. This is how my life with mobile computing should be!

I enjoy using my computer at work. But at the same time I think that the computer should be a tool in my private life, with the goal of making everyday life more effective by spending less time on activities like searching for information I know I have somewhere on my system or retyping letters or documents that are lost.

To solve these (remember my demands for long battery-life and cool computing), I need tools that are small and effective at what they do. I use Mozilla Thunderbird for my email, since it’s a great program that does what it is  good at very well, and has little or no problems with viruses like other email clients I’ve previously used. I use Google Desktop to index the data on my computer, and can recall almost any email conversation or instant messenger chat I’ve had within a few seconds performing a local Google search. This is great, since my email is where I store my relational data; data that defines me and my relationship with the people I have around me, that is!

To sort my digital pictures (which is starting to become a large library of images), I’ve created a small utility that merges the pictures with my calendar (which is still Outlook, mainly because of its integration possibilities and ease of programmability). The tool exposes all my pictures as a calendar that is viewable 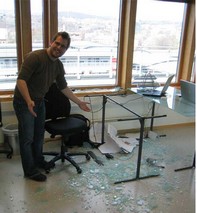 from within Outlook. In combination with this tool, I’ve also created a program that uses appointments and data from Outlook to sort images in folders and subfolders with names from the appointments I had when the pictures were taken. A simple backup routine is also part of my image library, so that all the pictures and their corresponding folders are copied to my media server (which is a small Linksys NSLU 2 together with a D-Link DSM 320) for viewing on our TV set.

To end this article on how mobile computing (and Ink in particular) integrates with my life, I’d like to show you a picture of me, my Tablet PC, and my desk (or what used to be my desk). In my office everyone has glass desks, and I’m officially the first one that has managed to break one of them. My Tablet PC survived without a scratch, and I spent the rest of the day cleaning up! Thanks for taking the time to read about me and my life in ink! You’re always welcome to follow my journey on my blog: RND() Thoughts.