Look out, Chrome OS. Previously restricted to a handful of notebooks and netbooks, the instant-on companion OS called Splashtop is now open for all Windows-based PCs for free. On top of that, this web browser-based system now has access to the Chrome Web Store, making it firmly competitive with Chrome OS while remaining a companion to Windows.

Announced on the Splashtop blog, version 1.0 of the OS is now considered stable enough for wide release and should work on nearly any Windows-based PC. Keep in mind, however, that doesn’t mean it will work smoothly. More on that in a bit. 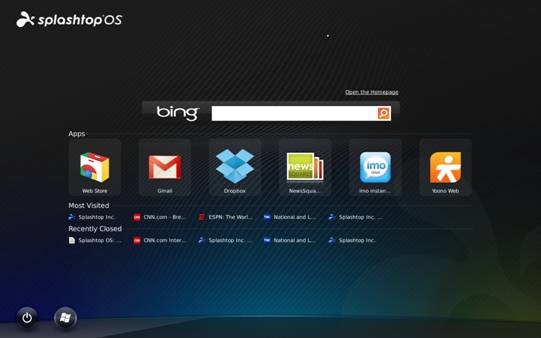 The two major changes to the OS are a stripdown to web browsing and access to the Chrome Web Store. Previously, Splashtop tried to give access to some data on the PC, such as photos. The current iteration does away with that and focuses entirely on delivering web access. The system opens to a splash screen (shown here) with search and shortcuts. But once you pick something, it goes straight into Chromium, the open source version of Google’s Chrome browser. That, of course, gives you access to any data you have sync’d to the web, greatly minimizing the need to access local data. Along with that, access to the Chrome Web Store allows for customization via extensions and other capabilities via web apps.

While that may make it sound like little more than a Chrome OS wannabe, Splashtop remains a companion OS intended to be a quick and simple boot option alongside Windows, rather than a complete replacement.

I gave Splashtop a shot on my Fujitsu T900 Tablet PC this morning with mixed results. First, the installation process could not be simpler. It installs through Windows with no messing with boot loading or any of that. It even had to option to automatically transfer my bookmarks and Wi-Fi settings. Took no more than a few minutes.

At startup, it works like any other dual-boot system, giving the option to choose between Windows and Splashtop with Windows as the default. This puts a slight bump in the road for the quick-start OS, but still speedier than booting to Windows. After booting, I found that it recognized my SD card, so access to local data is not entirely sacrificed.

Unfortunately, while Splashtop did work on this tablet, it did not work perfectly. Pen and touch via the Wacom dual digitizer did not work. I did not expect it to have the right drivers, so this was not a surprise. Nevertheless, without such support, Splashtop is a no-go for tablets. On the T900 side, there is no way to choose the OS while in slate mode; it simply was not designed for dual-booting without the keyboard. Splashtop also failed to properly recognize and calibrate the battery, showing zero charge and shutting down after a minute (showed the actual charge just fine after I booted to Windows). Obviously, Splashtop won’t be running on my T900 again until the digitizer and battery issues are fixed.

Where I expect Splashtop to shine is on netbooks. It’s quick booting. It should be easier on the battery and processor than Windows (though I can’t test this). And it’s actually net-centric, which makes sense for netbooks. For anyone with a Windows-based netbook or notebook, Splashtop is an easy way to get to the web quickly. Again, it’s free and installs (and uninstalls) through Windows, so its easy to try too.