Last night FedEx dropped off Google’s first Chrome OS notebook. The Cr-48 isn’t going to be sold to consumers, but the story here is software, not hardware. Manufacturers like Acer will likely mix things up in 2011, but for now we have a pretty straight forward device in terms of hardware and software. This is the first part of a multi-part Cr-48 review series.

The Cr-48 appeared in a plain brown box. Nothing fancy and no specs listed on the side like we usually see on other notebook boxes. Inside the box was the Cr-48, the battery, an AC adapter and a sheet of paper with a list of 10 things I should try with Chrome OS.

The Cr-48 itself reminds me a lot of the 13.3″ MacBook. The Cr-48’s island-style keyboard, hinge design, battery design and physical dimensions  all seem to be influenced by the entry-level MacBook. There’s even a green LED that illuminates next to the webcam when it’s in use. But the Cr-48 also reminds me of a ThinkPad. The black surfaces are soft to the touch and there’s nothing flashy about it.

One of the frustration points of getting a new Mac or PC is the setup process. You know the drill. Typically when I get a new computer I spend the better part of a day migrating files, installing updates, installing apps. Leaving all of that aside, it can take half an hour or more just to get to a usable web browser on some machines. It really isn’t too much fun sit there and watch drivers and software update before you can dive into your new purchase.

Google Chrome OS’s setup is very refreshing and much faster compared to Windows or OSX. 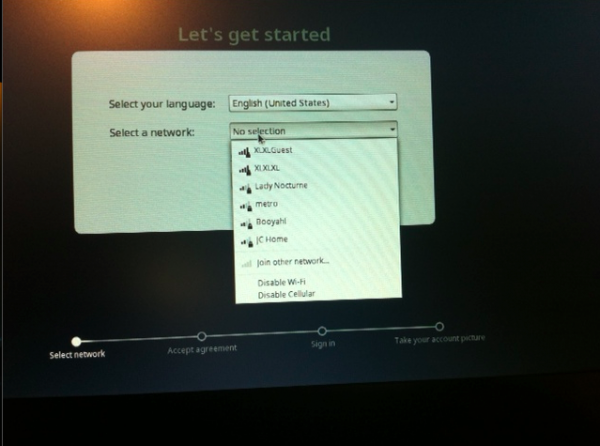 Step one is simply selecting your WiFi network and entering your passcode. 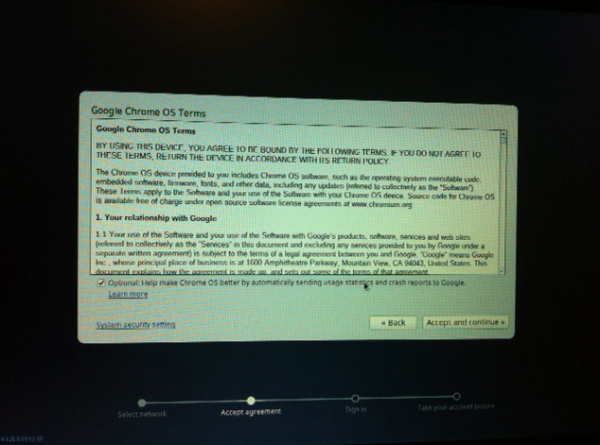 Step two is pretending you read the Google Chrome OS terms of service and hitting accept.

Step three is signing in with your Google account. I used my personal Gmail account and didn’t snap a photo of this part of the process because I try to keep that address private. 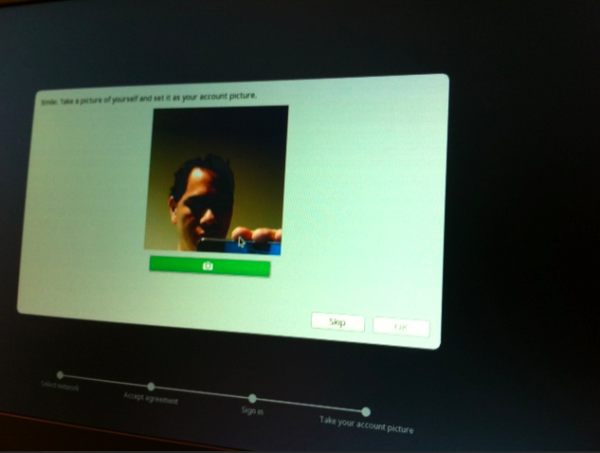 Step four is snapping a photo of yourself so you remember what you look like when you sign on to your notebook every morning. You can skip this part of the process if you’re camera shy. 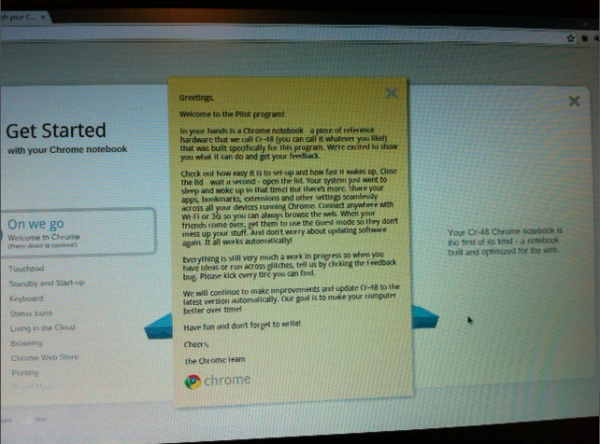 Step five is…well there is no step five. That is, unless you count using the thing as step five. After less than one minute of hitting the power button I was browsing the web.

I’ve only spent a few hours using the Cr-48 so far and like a lot of things about it. For example, it’s the only laptop on earth that I could give to my mom and not have to answer a bunch of questions about setup. But it’s also the only one that wouldn’t be able to sync with her iPhone and Kindle.

The cloud has come a long, long way since I interned at Salesforce.com and was indoctrinated into the cult of the cloud by Marc Benioff himself.  I love the simplicity behind Chrome OS and the Cr-48, but is the browser really all we need? I’m not so sure. Stay tuned for the next part of the Cr-48 review.