This morning, after months of hints that the feature could possibly be coming soon to Android and Chromecast users, today Google announced that Android screen mirroring to your TV is now officially supported by Google Chromecast.

Last year Google surprised many while releasing and announcing its new Nexus 7 tablet, by also announcing a brand new device many now know as the Google Chromecast. This $35 HDMI dongle plugs into our HDTV’s and can mirror certain apps, music, or video from our Android smartphones and tablets (iOS too) right to the big-screen in your living room.

Ever since Google first announced the Chromecast consumers have been waiting for this full-fledged feature and option to arrive, and it appears to finally be coming soon. For now the update isn’t available for all Android users yet, but over the course of the next few days the Chromecast v 1.7 app update should deliver full Android screen mirroring for a wide array of devices. 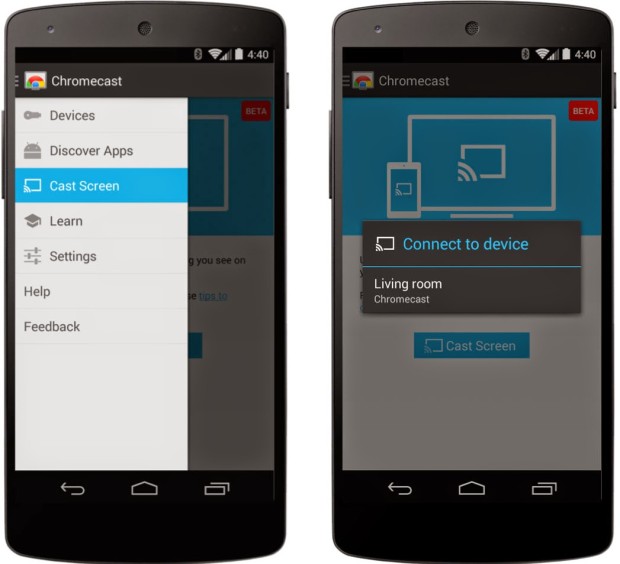 A few weeks ago at Google I/O this feature was officially announced and Google claimed it would be coming soon, and now it’s finally here. While there’s several similar apps available from the Google Play Store, such as AllCast, having native and built-in full Android screen mirroring is a pretty important feature.

Google detailed the update this afternoon in a blog post, but doesn’t go into specifics regarding what we can expect cast from our phones to the TV in your living room or bedroom.

“Starting today, you can mirror your Android phone and tablet to the TV so you can see your favorite apps, photos or anything else, exactly as you see it on your mobile device—only bigger.”

According to Google users will be able to mirror everything from their mobile device right to the biggest screen in your house. Everything from your favorite apps, photos, video, or “anything else” which leads us to think games may also be supported in the nearby future. Obviously streaming games requires a little additional power, so we’ll have to wait and see what else Google has up its sleeve for Android mirroring with Chromecast.

As you can see from our detailed review above, there was already plenty to like about the Google Chromecast, not to mention it’s only $35. Since being announced we’ve seen a wide array of content creators add support to their apps. Chromecast works with Netflix, Hulu, HBO Go, Pandora Radio, and tons of others.

While multiple apps have been updated over the past 6-8 months with full Chromecast support, this update coming soon should alleviate that problem for everyone. Anything you have on your Android smartphone or tablet can be cast to the Chromecast with the tap of a button. That includes navigating Google Earth and street view right on the bigscreen. 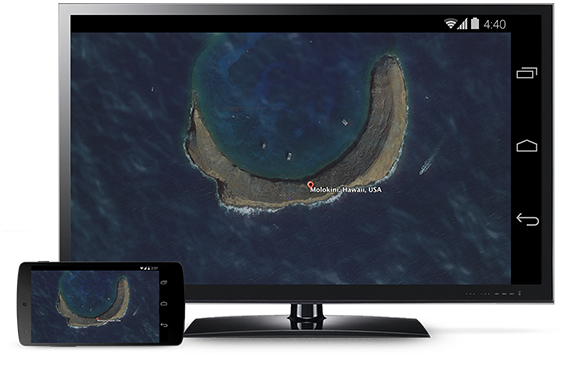 According to Google all Android 4.4 KitKat and Android L developer preview devices have full access to Android Mirroring right now, and the update to v1.7 of the Chromecast app should bring support to multiple popular Android devices. The initial list of supported devices are: Nexus 4, Nexus 5, Nexus 7, Nexus 10, Samsung Galaxy S5, Galaxy S5, Galaxy Note 3, Galaxy Note 10 (and other new Note devices with Android 4.4) as well as the HTC One, HTC One M8, LG G2, LG G3, and more will be coming soon.

Google also explains how to mirror to a TV using Android and your Chromecast, for those interested in this awesome new feature.