With the appearance of a device called Chromecast on the Google Play Store, it seems Google could be taking this morning’s breakfast announcement as an opportunity to show of a new play for users in the living room.

When looking up information about the devices being sold on the Google Play Store, a user from DroidLIfe noticed an entry on about devices page for something called Chromecast. Unfortunately, clicking on the link didn’t detail any information however another user was, reportedly, able to get more information about what Chromecast is. Allegedly, it’s a television service that will be able to work with an assortment of Chrome OS powered devices like the Chromebook Pixel and the Chrome web browser. 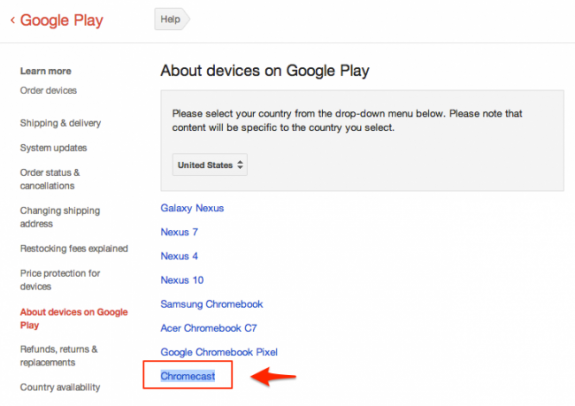 A screenshot of the Chromecast entry in the Google Play Store.

This service would also work with Chromekey, or what is being described as a dongle that would be able to plug into a television set. Chromekey would be very cheap, and allow Google to bring it’s web-browser experience to the television.

If Google were to announce Chromekey or Chromecast today, it would be seen as a huge revamp of its efforts to attract users in the home entertainment space.

Last year Google unveiled and then cancelled the Nexus Q, an orb shaped device that it billed as “the world’s first social streaming media player.” The Nexus Q debuted to mixed reviews, and was universally panned for its lofty price tag of $300. The fact that users needed to have an Android devices handy to access content also didn’t help the device’s reputation.

Prior to announcing the Nexus Q, Google also attempted to establish a foot-hold in the living room with Google TV. Unlike the Nexus Q, Google TV actually shipped as an operating system that other manufacturers could use in set-top boxes and smart televisions. Google hasn’t had much to share about Google TV in months, and it isn’t as widely supported by manufacturers as it had been right after launch.

The launch of Chromekey and Chromecast would pit Google head-to-head with two of its largest competitors. Apple’s Apple TV has picked up steam in recent months. The company recently announced that it would be adding HBO Go to its list of streaming partners on the $99 device.

Microsoft is also preparing to make a larger play for the living room. Its Xbox One will allow users to plug-in their cable box and have the device completely replace the user interface of their television service. It’ll cost $499.

Google’s is also expected to announce Android 4.3 and a revamped Nexus 7 at today’s event.