Google released a new version of the Chromecast streaming device called Google Chromecast Ultra. They added support for 4K video and wired networking, but they also increased the price to $69, nearly doubling it. Better video resolution and faster networking might potentially make it worth the extra cost. We’ll let buyers know if they should get the new Google Chromecast Ultra or save their money and stick with the earlier version. 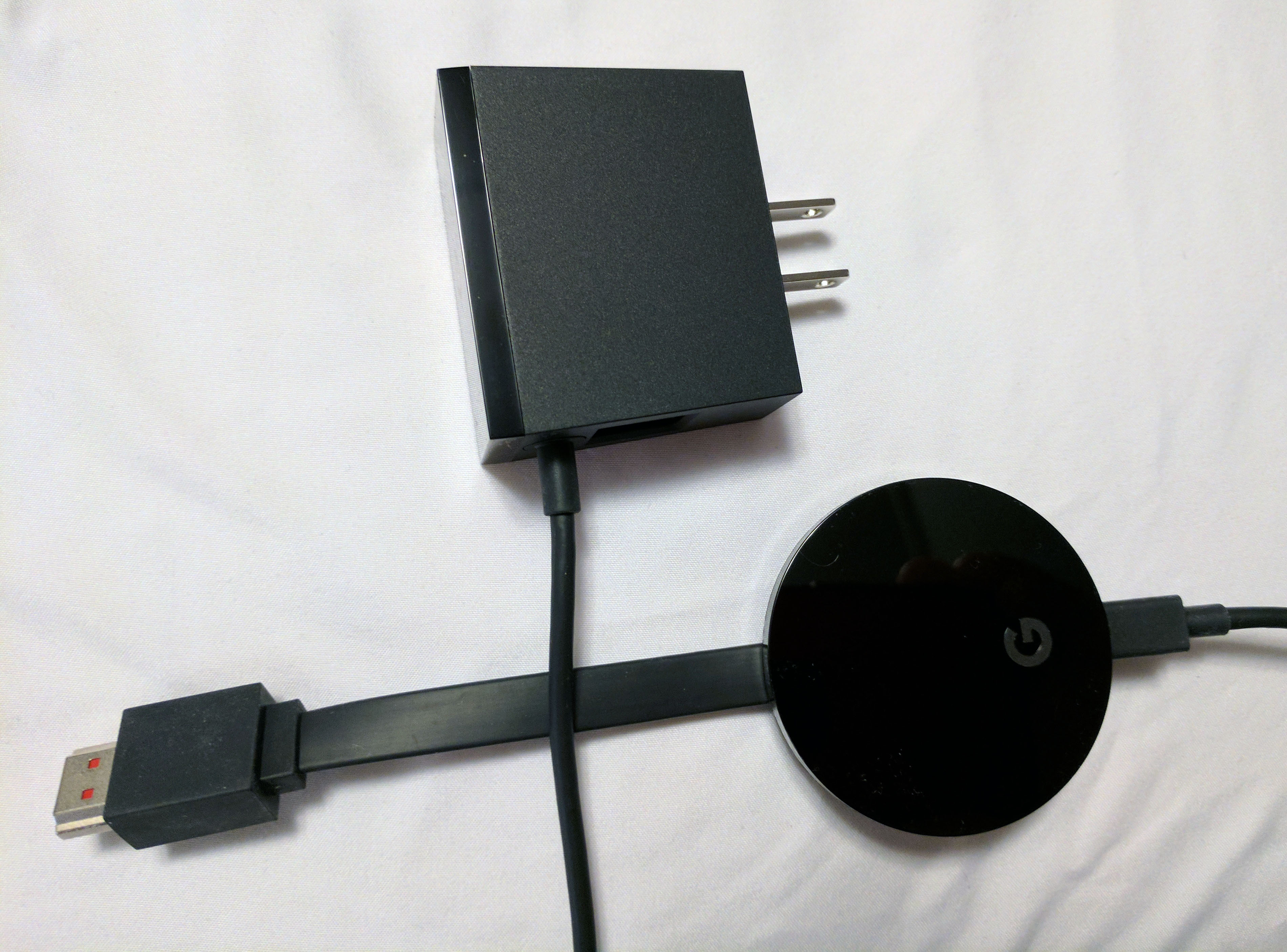 The new Google Chromecast Ultra looks the same as the earlier version. It’s a 2.29-inch round disk with an HDMI cable and a detachable micro-USB port on the other side.

Users plug the Chromecast into a TV with the HDMI cable and plug a micro-USB cable into the port on the other side. Plugging that into the TV’s USB port powers the device and it works like the old Chromecast. However, the device will show an error on the screen of the TV that says you must use the included AC-to-USB adapter to get the full 4K display. In other words, you miss out on the two most important new features, 4K resolution and wired network connectivity. 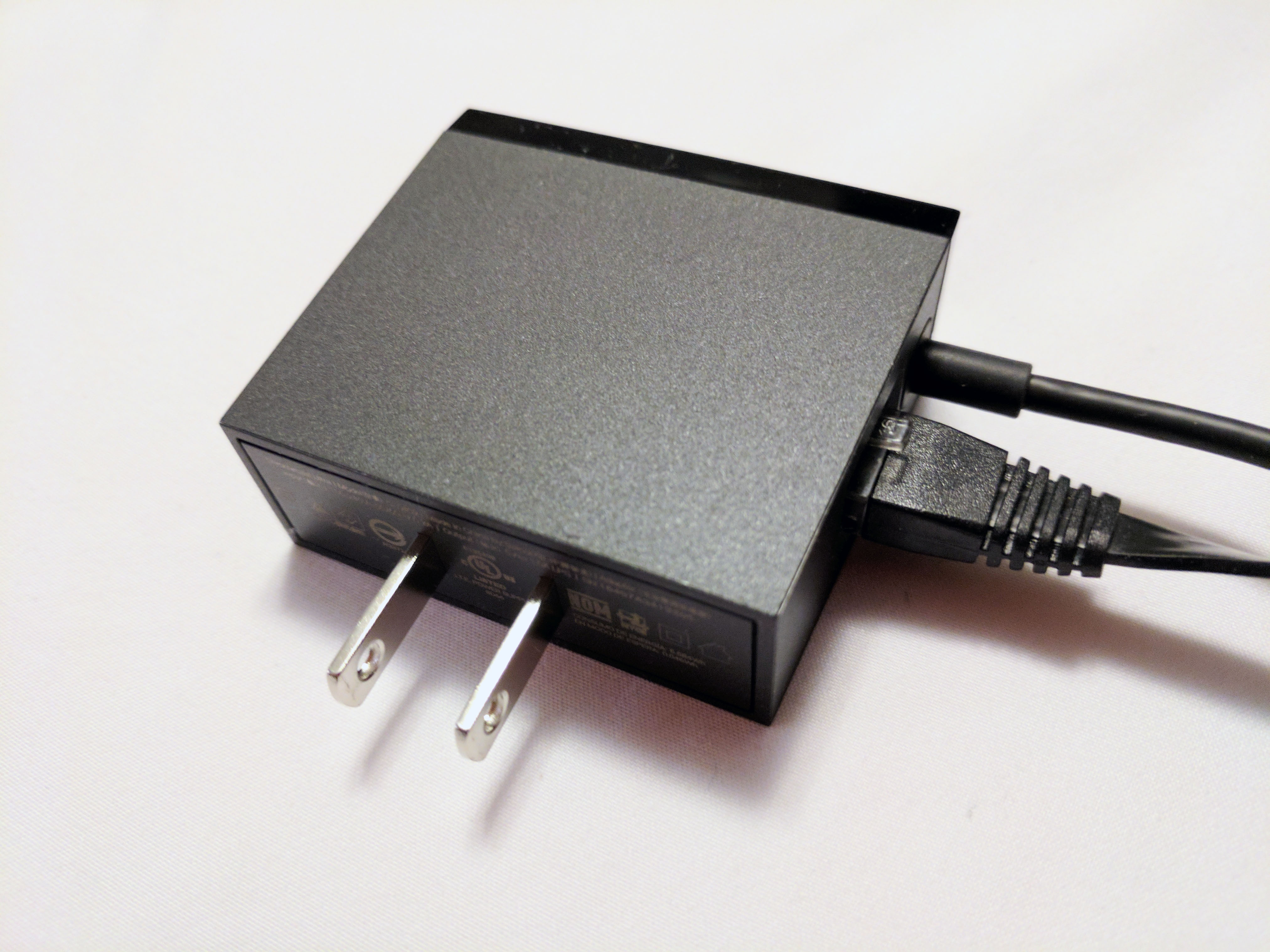 Users must use the included AC to USB adapter to take advantage of wired Ethernet networking.

The new Google Chromecast Ultra supports wired networking and as a result can stream 4K video on a supported TV set. The user must use the included power cord and plug an Ethernet cable into the AC brick.

The new installation setup works fine if you’re at home or an office with a wired network and a router or networking switch near the TV set. However, using the Chromecast Ultra on the road as a presentation tool in client offices or for entertainment in a hotel room will become problematic if there’s no wired connection nearby. 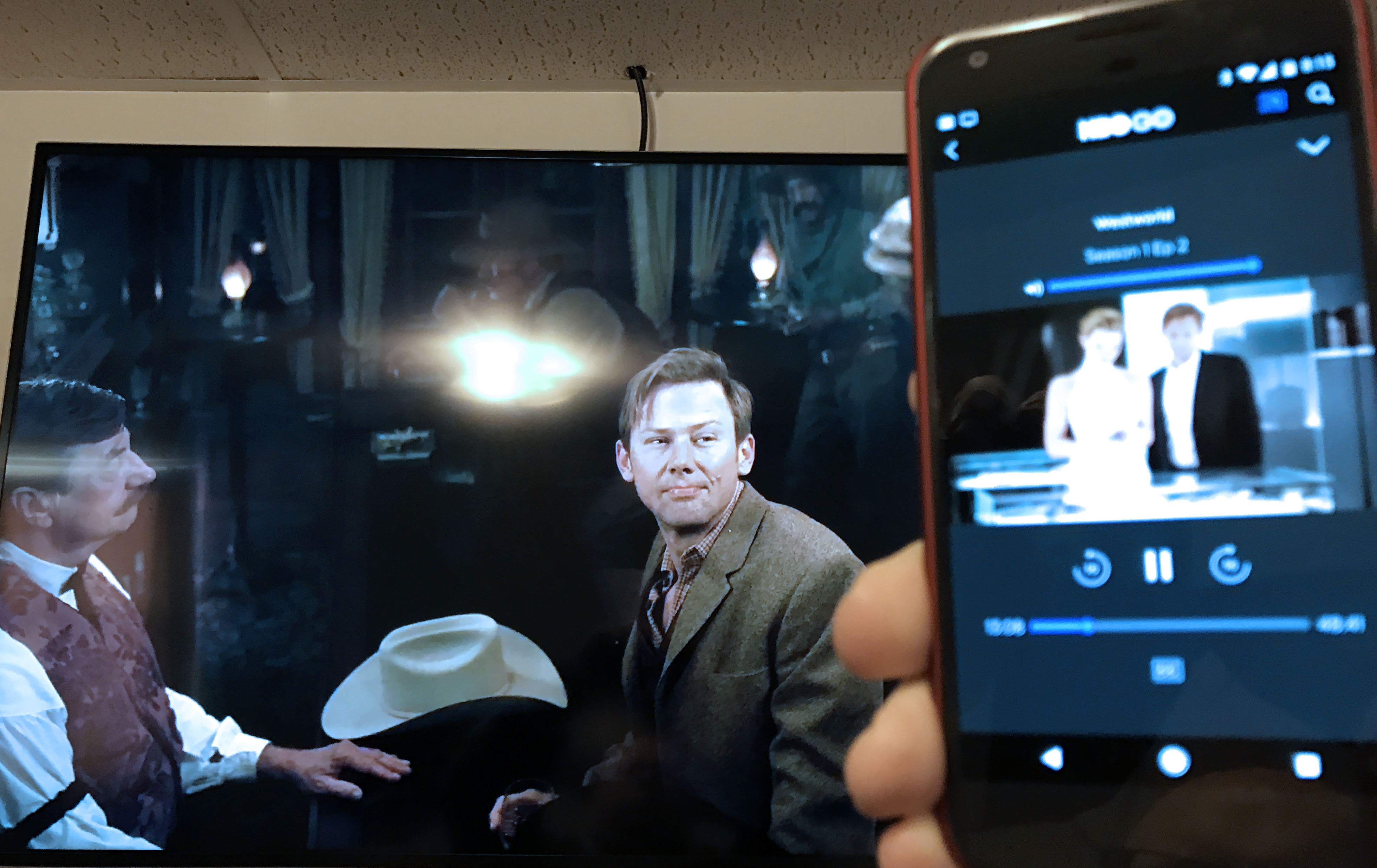 When the user sets up their new Google Chromecast Ultra with a wired connection and plugs it into a 4K or Ultra HDTV, the picture quality looks great. Netflix and some YouTube videos will stream in 4K and these videos look rich and crisp. The streams play smoothly without any hiccups or stuttering. The videos started quickly and the experience seems comparable to streaming from any more powerful wired 4K capable device, like the NVIDIA Shield Android TV or the new Amazon Kindle Fire TV.

The Chromecast Ultra performs great most of the time. However, I experienced a couple of crashes that required me to unplug it and plug it back in again. I’d guess this came from a network stall.

What Can You Cast to Chromecast Ultra?

The Google Chromecast Ultra works with almost any Android phone or tablet and many iPhone or iPad apps. Users can also cast from their Chrome browser or Chromebook computer. 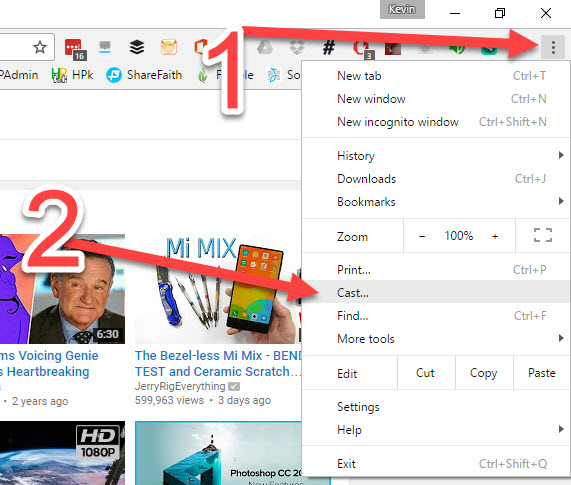 Open the Chrome menu and choose Cast to cast from the Chrome browser.

To cast from the Chrome browser or a Chromebook, open the browser’s menu from the upper right corner. Then select Cast… from the menu. A pop up will list the available Chromecast receivers in your network. 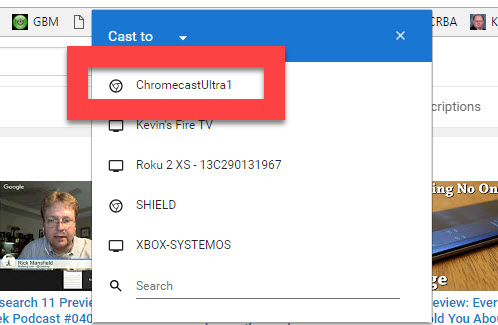 Once the user chooses the Chromecast Ultra from the list, the contents of the active tab in Chrome will show up on the screen of the TV with the Chromecast.

Find this cast button to start casting a video to the Chromecast Ultra.

From an app that supports Chromecast, start a video and tap on the cast icon and select the Chromecast from the list of supported receivers. The Chromecast will start streaming the video on the TV. 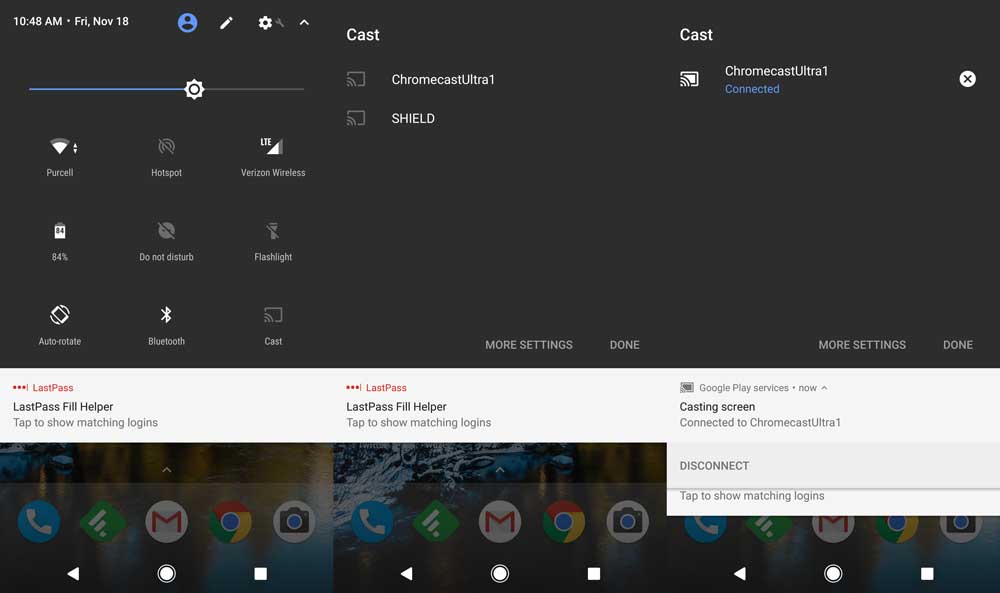 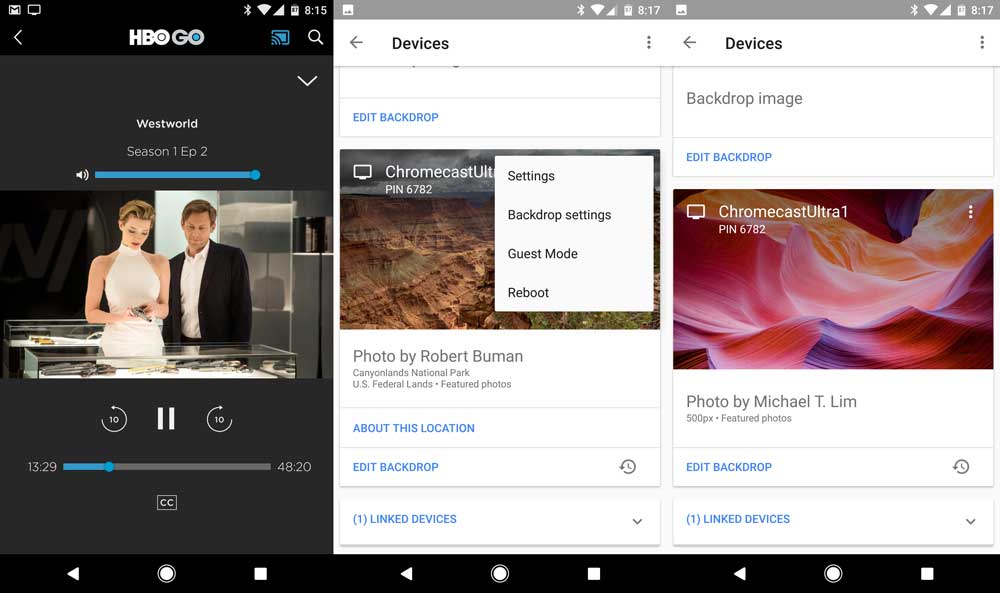 To configure the Chromecast Ultra, get the Google Home app for Android or iOS, former called Google Cast. The app handles configuration of a Chromecast Ultra, the previous generation Chromecast and the new Google Home device that works like Alexa only using Google as the back-end. Tap on the three dot menu button in the upper right corner of the device’s display thumbnail. This brings up the menu (center screenshot above).

While playing from an app that supports casting to Chromecast, like HBO Go (above left screenshot), the controls will show up on the screen. Go to other apps and the controls show up in the notification area. 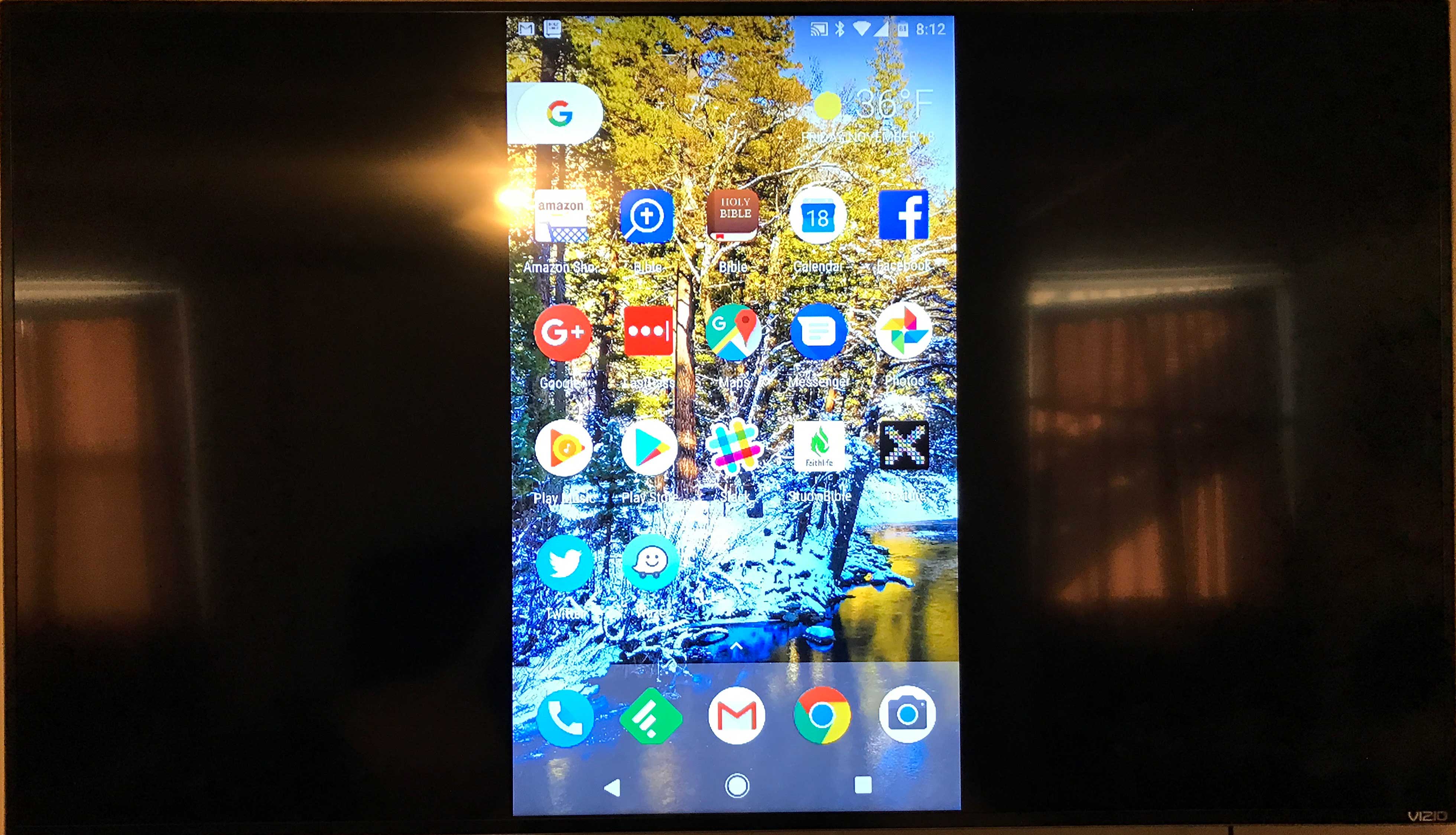 People who own a 4K TV will likely enjoy the 4K video available from apps like Netflix, some YouTube videos or others. However, they will need a nearby Ethernet port to connect.

People who only want to use this to stream 1080p or lower resolution content shouldn’t bother spending the extra $34, unless they’re worried about future-proofing their purchases. Get the Chromecast Ultra only if you think you may want to use 4K at some point or if you know you’ll want to use a wired network connection in the future.

The Google Chromecast Ultra ($69) works well. It’s a great choice for people who own both Android and iOS devices in the same house, since users of both can take advantage of the device. Other streaming devices do a great job and even let the user cast their mobile device’s screen or videos to them, like the Fire TV or the Roku. However, the Chromecast Ultra is a simple device that’s easy to take with you in your computer bag. You can connect it to your device, even without Wi-Fi. For these reasons, it’s a definite buy and the best Chromecast device yet.