The Chuwi HiBook 2-in-1 convertible Windows 10 and Android Lollipop tablet/notebook checks off a few interesting boxes for potential buyers. It’s a tablet and a notebook in one. It’s a budget computer with decent hardware design that doesn’t feel cheap in your hands. It adds something that few other 2-in-1 tablets include. The Chuwi HiBook dual boots between Windows 10 and Android Lollipop straight out of the box.

After using the Chuwi HiBook dual-boot tablet, I’m moderately impressed. The build quality for a $275 2-in-1 computer/tablet is surprisingly good. It’s not fast, but at this price no one should expect much speed. 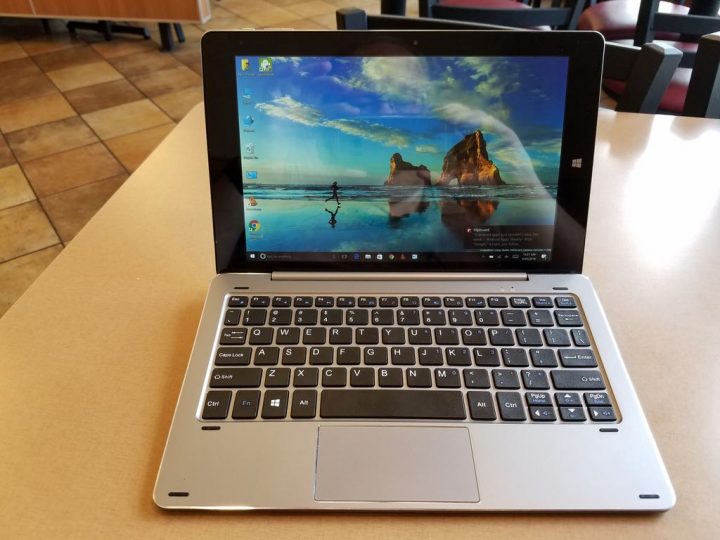 Let’s look at the Chuwi HiBook and see what buyers will give up for a device at this price and see if it’s worth the cost. How does it handle the dual-boot experience and does it makes sense to put both operating systems in one device? 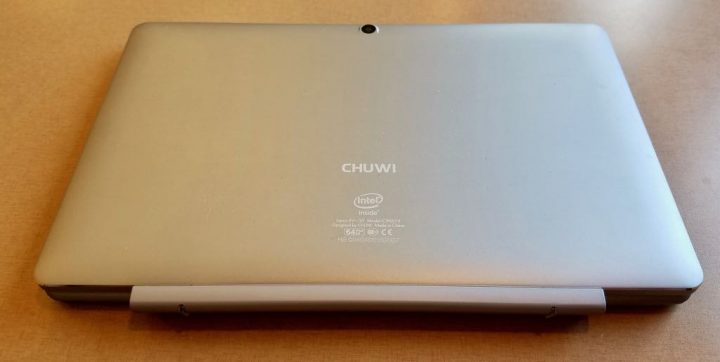 The Chuwi HiBook sports an all-metal unibody design with a 10.1-inch 1920 x 1200 resolution display. The screen looks nice and sufficiently bright and detailed for a budget tablet. The touchscreen responds quickly, although the extreme edges can give the user trouble while using a stylus. It’s highly reflective like most budget displays today.

The Intel Cherry Trail Atom-X5 Z8300 CPU handles basic Windows and most Android apps. People who need to run power-hungry apps should stay away. Hardcore games or high-end applications won’t work well on the Windows 10 side of this computer.

The company included 64GB of storage and 4GB of memory. That’s double what most of these low-cost tablets usually include. It makes little sense to buy a computer with only 32GB of storage and 2GB of RAM. Getting double the storage for the same price makes the Chuwi HiBook more interesting to buyers.

There’s also a micro-SD card that can handle up to 128GB of space. I put a 64GB card in it doubling the built-in storage.

The other ports include a Type-C USB port for charging and a micro-USB which only works as a connector. The micro-USB port won’t charge the device. There’s also a mini-HDMI port and a combo mic/headphone jack. There’s a hole for a built-in mic between the mini-HDMI and micro-USB ports. 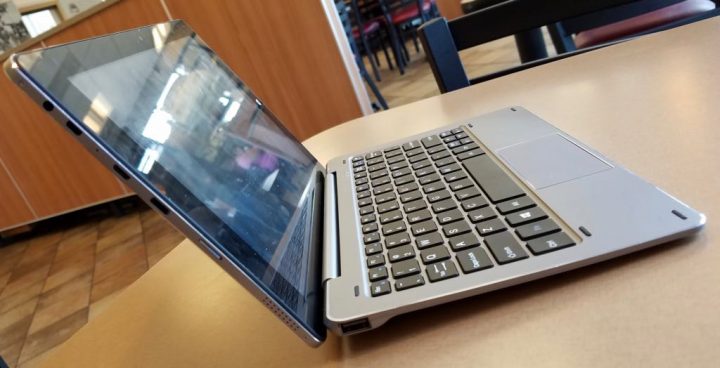 All the ports come on the left side. The right doesn’t hold any ports or connectors. Each side holds one of the two stereo speakers. They don’t pump enough volume, sound muddy and distort easily. I would never use them for music or movies for very long.

Chuwi put a 2MP front facing camera and a 5MP rear camera. Take a look at some samples direct from the tablet without any editing. They look a little washed out and it’s hard to get crisp images. All of the images below come from the rear camera except the photo of me.

Taking the first photo takes a few seconds after the user taps the shutter button. After the first, it fires quickly.

I wouldn’t use the cameras on this machine for taking important pictures unless my phone battery was nearly dead and I had nothing else available. 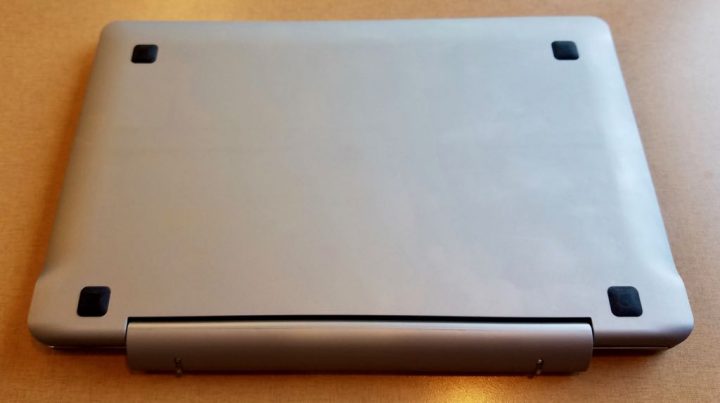 The 6600mAh battery gives acceptable 6-hour battery life. We’d hoped for more, but not at this price.

The tablet alone weights 2.2 pounds and measures 12.5 x 8 x 1.5 inches. The detachable optional keyboard adds 1.2 lbs and .7-inches to the weight and thickness.

The built-in Wi-Fi isn’t compatible with my Samsung Galaxy S7 Edge mobile hotspot. It doesn’t list the phone’s hotspot in the available Wi-Fi access points list. My iPhone’s hotspot works fine and it finds the Karma Go Portable Hotspot without any issues. Galaxy S7 or S7 Edge users should look elsewhere for an ultra-portable 2-in-1 Windows tablet or Android tablet. 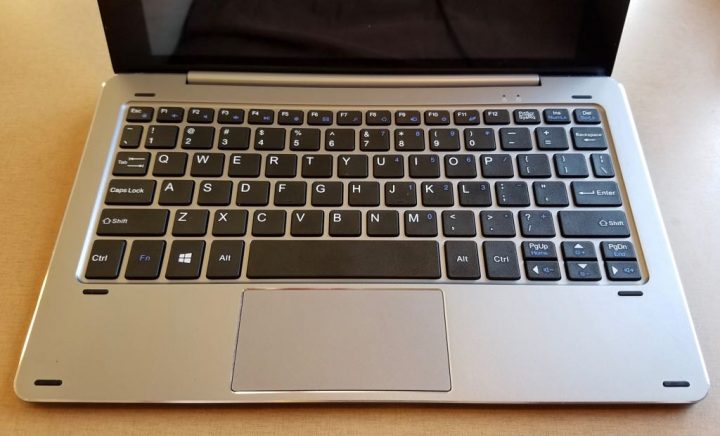 Chuwi sells the detachable keyboard as an add-on accessory instead of including it in the box. Microsoft and others do the same, so that’s not too surprising. It retails for an extra $57 at Amazon.

A sturdy hinge holds the tablet up while open. It’s hard to open it because the hinge is so stiff. It’s also a challenge to detach the keyboard once it’s connected. Put it back on by lining up the connectors and pushing. I wish it clicked into place to give the user a tactile or audible confirmation that it’s connected properly. 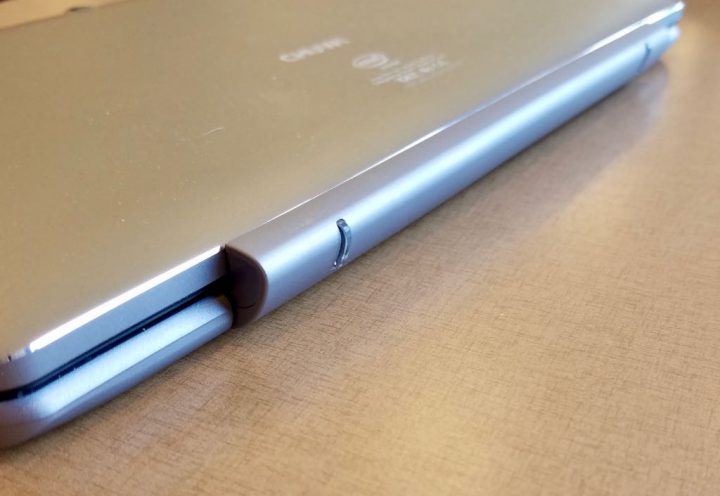 The hinge also doubles as feet that raise the back edge of the keyboard off the surface. Some users like a slight angle as they type, while others don’t. The angle’s really slight, so it won’t help those who prefer that raised back edge. 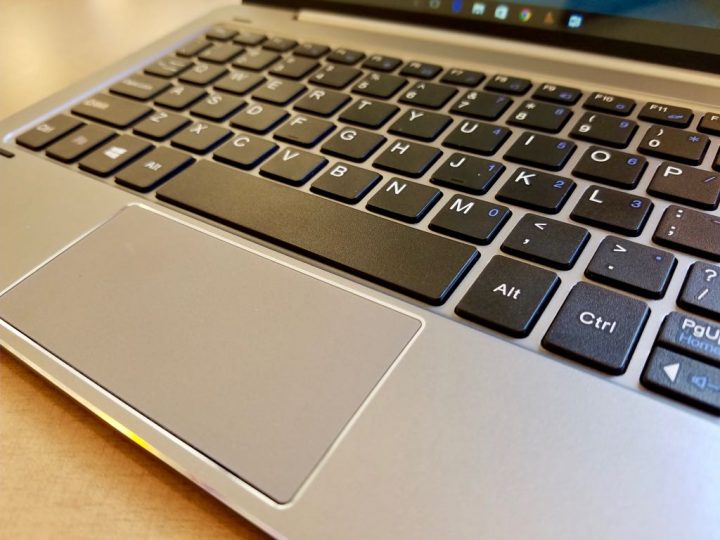 The keyboard includes power and caps lock indicator lights on the back right edge. On both sides towards the back there are USB 2.0 ports, great for connecting flash drives or peripherals that don’t need a lot of bandwidth or power.

The keyboard gets its power from the tablet. The connector midway between the two hooks snaps to the bottom edge of the tablet. I wish the keyboard included some extra battery life. Instead, it drains the battery a little. The tablet would last a bit longer without the keyboard in place.

I hate typing on the keyboard. The trackpad is even worse. Buyers should probably save their $57 and get a better Bluetooth keyboard and stand instead. The cramped key layout makes it hard to touch type for people with big fingers. The track pad is overly sensitive and it’s hard to keep from hitting it with my palm while typing. The trackpad is too small. It’s in the way and I would rather have more space for the keyboard. I’d also prefer to use the touchscreen for pointing and selecting things onscreen. The arrow keys in the lower right corner are too small and I constantly mistype while using the shift and enter keys.

Chuwi HiBook as a Tablet

The dual-booting feature makes for an interesting sales gimmick, but does it qualify as a good Windows or Android tablet? Despite the meager hardware specs, it ran the simple programs I wanted to run and the nice high res screen made it useful for entertainment and some mobile work. Windows in general still needs design help before anyone will consider it a great tablet OS. Microsoft does a better job on their Surface tablets which are bigger and include the excellent Surface Pen. However, for those on a tight budget the Chuwi HiBook isn’t a bad little tablet. It beats the old Windows netbooks that used to dominate the low-end market. It competes well with all the Chromebooks that fit the price range. 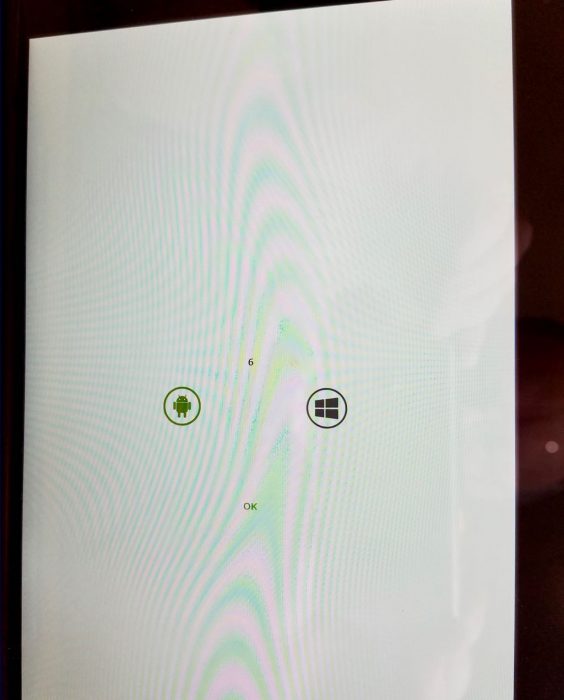 Starting up the tablet, there’s the option to boot into Windows 10 or Android 5.1 (see above). There’s also an icon on the home screen to restart the computer from Windows 10 into Android (see below). 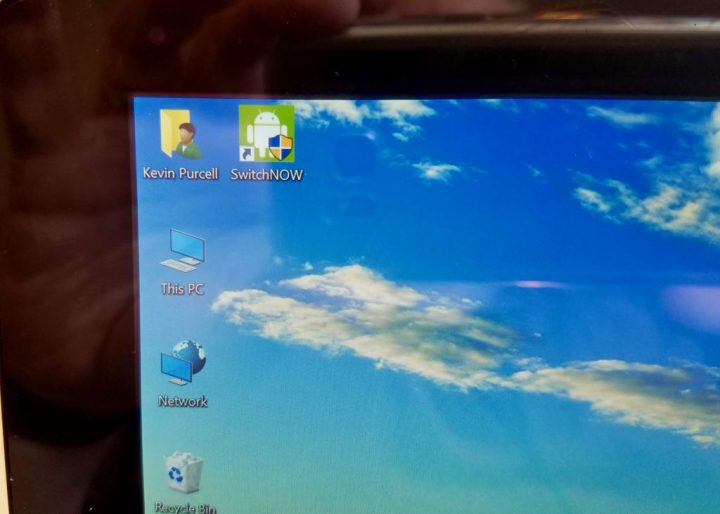 Chuwi doesn’t have any plans for upgrading to Android 6.0 or the new Android N now in public beta. I doubt the tablet will get either version any time soon.

Despite the older version of Android, it works fine as an Android tablet. It runs apps well and they load quickly after tapping the icon. However, the limited amount of storage available to Android makes it only usable for occasional Android use.

Do people really need a dual-boot Windows and Android tablet? I doubt many will enjoy using the Android side of this device. However, it works for the occasional use of a few of Android apps. This option makes the Chuwi HiBook an interesting option for budget tablet buyers. Don’t select it if you primarily want an Android tablet. Consider it a Windows tablet that lets you run a few Android apps for special needs or as a limited media device.

It’s hard to recommend the Chuwi HiBook as an Android tablet as mentioned above. However, a few buyers might want to take a close look. If you want a Windows 2-in-1 with the option to boot into Android for a small collection of must-use apps for less than $300, then give the device a look.

Potential buyers can learn more at the company’s website or in their Amazon store.

Let’s look at a few alternatives. There are a dozen Windows 2-in-1 devices I’d rather use. If money isn’t a concern, the look like the Surface Pro 4 or Surface 3 on the high-end. Acer sells the Acer Aspire One R13 line of convertible notebooks that range in price from $350 to $1,200. Take a look at the review of one model from Notebooks.com.

The ASUS Chromebook Flip might work for those focused more on an a low price notebook computer that also runs Android apps and converts to a tablet. It costs less than the Chuwi HiBook, but can’t run Windows programs and apps.