Back in February we learned that a big Clash of Clans update was coming in March, and now we know some key details. Starting with a brand new Dark Elixir troop, the Bowler, higher Hogs, Golbins, and more. Not to mention Clan War match-making improvements, a new Inferno Tower level 4, bigger troops and faster spell brewing. This is what Clashers need to know.

In December the biggest update to Clash of Clans in years arrived. It added a Town Hall 11 to the game, but made some major changes that weren’t for the better. Users were upset, problems arose, and many even quit playing Clash of Clans completely.

However, another big March 2016 Clash of Clans update is almost here, and it’s almost as feature-packed as the one late last year. Supercell is making more big changes to improve every aspect of Clash of Clans, adding a higher level Inferno and Mortar, fixing gameplay, evening out Clan Wars, and doing everything they can to keep this game #1 in the download and revenue charts. 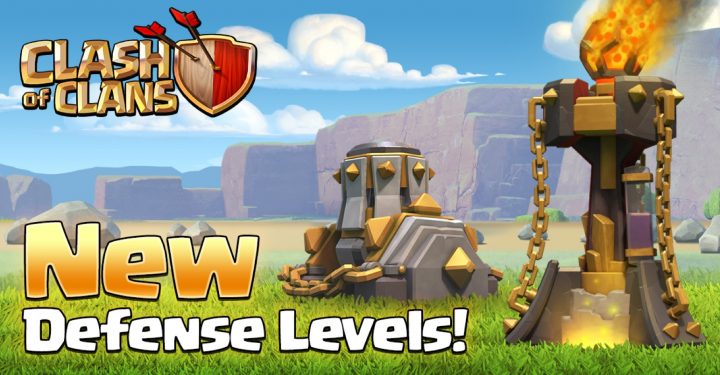 In early March Supercell released some important details regarding an upcoming update, and now we know that update will be arriving in March. Meaning within the next two weeks some huge changes are coming to everyone’s favorite game.

The Clash of Clans March 2016 update will fix Clan Wars, make matchups more even, improve match-making as a whole, and balance out the entire game to make things more even, fun, exciting. This week though, Supercell released a huge changelog of all the big (and little) changes, a video showing off a new level 4 Inferno, and much more. We can expect this update to arrive early next week, likely before March 25th.

Update: Today, for the first time in over a year and a half, Supercell announced a new Dark Elixir Troop. It’s called the “Bowler” and he’s essentially a Dark Elixir goblin mixed with the Flinstones, who throws a ball (rock) at any building, and does splash damage to nearby buildings. Here are three videos of “sneak peaks” showing us some of the incoming chances, starting with the Bowler.

His stats and information could change, but so far he’s not quite as deadly as the wizard in terms of damage, but can handle twice as much hits against him. Making for one tough and well-rounded troop. He looks awesome.

As you can see above, the March 2016 Clash of Clans update will be adding a faster and more powerful Inferno Level 4, likely only for Town Hall 11, as well as a level 9 Mortar. If Town Hall 11 players weren’t overpowered already, they certainly will be after this update.

That said, TH10 players don’t need to worry about dealing with these huge bases, as Supercell is making it so TH10 and TH11 players see each other less in matchmaking, as part of their “gameplay balancing changes”.

Supercell is also making the Valkyrie chicks stronger, faster, and more deadly, as they’re the least used troop in the game. A higher troop level for TH10 will arrive for the Valks, Hog Riders, and Golbins. Check it out.

So what else is new in the Clash of Clans March 2016 update? A lot. Not only are there bigger Mortar, Inferno towers, and everything above (with more to come) but there are loads of other changes as detailed by Supercell. Here’s what we know so far. It’s a big list, and there are some important details at the bottom you won’t want to miss.

• Inferno Tower Multi-mode acquires new targets faster
The Inferno Tower Multi-mode re-targeting delay was initially added a long time ago due to overwhelming effectiveness against Witches. With the latest Witch level in armies and donations, however, a speed increase is needed to help bring the defense back in-balance with even larger hordes of Skeletons.
• Town Hall 10 and 11 players are less likely to find each other in Multiplayer
Now that more players have progressed to Town Hall 11, we can make adjustments to matchmaking that will result in less TH11/10 matchups. Note that players in Champion league and above will not be affected.

• Skeletons spawned from Witches no longer trigger traps
Making Skeletons not trigger traps will leave mass-Witch armies vulnerable to an abrupt end via traps, unless the attacker carefully charts out potential hazards or uses a more diverse army to clear the way ahead.

• Goblin level 6 has been moved to Town Hall 9 (was TH10)
We’ve been a bit stingy with the Goblin levels. Goblin-lovers represent!

• X-Bow levels 2-4 damage increased
Once upon a time, the X-Bow was the most menacing defense in Clash. Now, with ultra-tanky Giants, Golems and Lava Hounds, X-Bows could use a bit of a boost to help stay relevant at later levels, especially as TH9 defense balance hinges upon them. The X-Bow previously rode just under Archer Tower DPS per TH level, but these changes put it slightly over.

• Valkyrie damage increased, hitpoints decreased
We’re trying to win a place in people’s armies with one of Clash of Clans’ least used troops. A general DPS increase sweetens the prospect, but the big difference is below, and is balanced by the hitpoints decrease.

• Valkyrie starts attacking much faster after reaching her target – give her a try!

• Battle time limit reduced to be 3 minutes per attack once again
In the TH11 update, we played a bit too cautious with the battle time limits. There were three main reasons why we changed it to 3 minutes and 30 seconds: the play field was expanding, the number of buildings and/or walls had been increasing over many Town Hall levels, and the Eagle Artillery could be tackled by tactical pre-strikes. However, monitoring the situation post-update, it turned out the extra 30 seconds of battle time wasn’t really needed. Bringing the time limit back to 3 minutes will help bring back shorter and tighter battles for all players, and was especially requested by the war community.

• New building constructions can no longer be cancelled (upgrades can still be cancelled)
This change is mainly to prevent the intentional building and selling of high level defenses during Clan Wars to get an unfair advantage.

As we can see there are some major changes here. From more powerful x-bows, more powerful valkryie units, faster spell creation, poison spells now require more perfection, as troops can run from it. Then there are multiple changes to the overall way the game finds players for users to fight, tweaks have been made to Clan War matchmaking, and other things. It’s a big update.

Read: Clash of Clans: 5 Features We Want From Clash Royale

It looks like we’re going to have to wait 3-5 days before the update arrives, but each day more details will arrive in the Supercell Sneak Peak thread.

Before the end of March a huge Clash of Clans update will be arriving full of changes. This will make things more balanced, gameplay tougher, spells brew quicker and give people more reasons to play what’s still the most popular mobile game on the planet. We know a new Dar Troop is coming to TH10, but it might not be with this update. Stay tuned, and we’ll add more details as they become available.