Clash Royale is one of the most popular mobile games on the market, from the developers of Clash of Clans. It’s extremely addicting, but frustrating at the same time. In this guide we’ll go over some helpful tips to win at Clash Royale, and share some high win-rate decks that will help players reach Arena 6 and beyond.

In March Supercell released Clash Royale, and it immediately jumped to the top of the download charts. It’s a fun and addicting game, but also can be very difficult to master, not to mention a lot of players spend real money. Those free to play gamers looking for an advantage will want to read on for some tips to build the ultimate deck.

The guide below will share a few decks that have helped myself and others reach Arena 6 or even 7, progress to 1800-1900 trophies, and even how to counter other popular decks with our own. Clash Royale is all about timing, skill, countering an attack, and keeping track of Elixir so users have enough money to battle until they win. Lets get started. 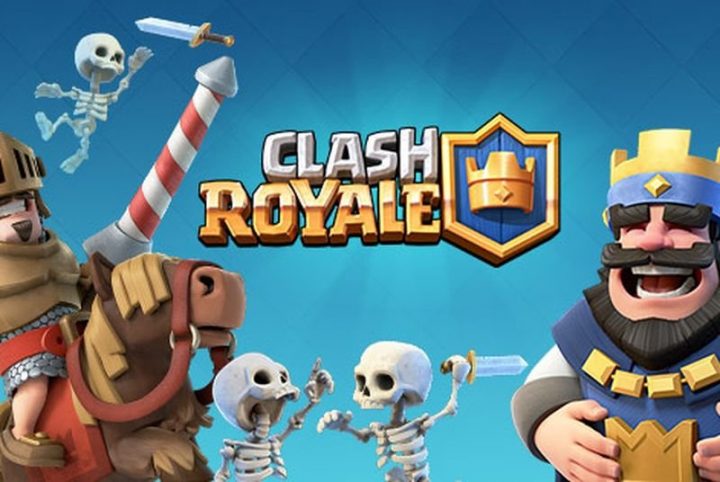 As you all know, Clash Royale has a lot of different troops, characters, spells and more that can be mixed and matched for the perfect deck to fight enemies in battle. However, the biggest thing we explained in our beginners guide above is managing Elixir, and the “average elixir cost” of each deck. This is important, to have a well-balanced deck.

First off we’ll show two similar yet very different balanced decks that can attack and defend against most opponents, how to counter them, and ways to win when the clock gets to 1:00 and Elixir speeds are doubled. Here’s my deck, and another popular option courtesy of ClashRoyaleArena. 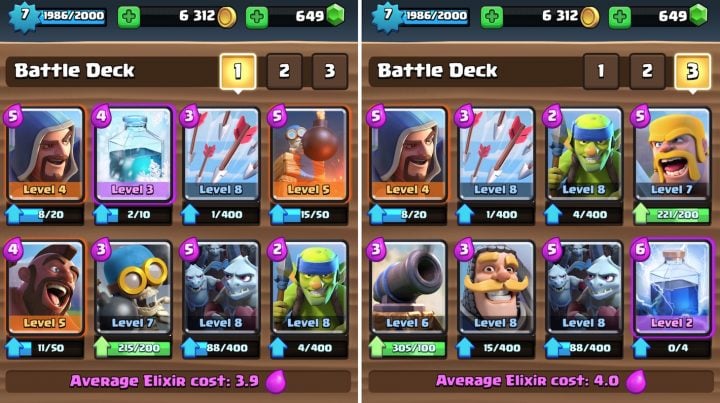 With both decks above start with Spear Goblins or the Bomb Tower/Canon at the beginning of the battle when the elixir bar gets around 10. I go first so the enemy has to counter, and they usually drop a big card first or use arrows. Then play to your advantage with elixir cost, troops for defense, and a strong attack. Drop the Canon or Tower in the middle to reroute attackers and for defense.

The deck on the left is a “bigger risk better reward” layout, while the one on the right is a slower deck that will take time and patience to win. Both are extremely capable and let me push to Arena 7.

As you can see both Clash Royale decks have some strong troops, splash damage units (hurts multiple targets at once), a good defensive card, and some cheap low elixir cards for quick access while in battle. Having some low cards and an average elixir cost around 3.8-4.1 is important. Otherwise you’ll be waiting for cards, or have too many weak troops.

Next up we’ll be explaining how to use these decks to take out enemies and secure a win. We’ll be covering some of the most popular cards or decks used in mid-level Arena 4-6 gameplay, and how to beat them.

Drop the Bomb Tower or Canon first, which will distract and kill Hogs or the Prince coming in to attack. This is very important to winning each battle. Drop the card in the middle to defend both sides, or in front of a tower that’s taking heavy damage. Quickly counter with Spear Goblins, Bomber, or a Knight on the other side to help take the enemy down faster. Canon and a Spear Goblin is only 5 Elixir to their 8-9, and now we have an advantage. Drop the Goblins after they use a freeze spell, so it doesn’t get them too.

With the deck on the left players can counter with the Hog Rider and a freeze spell of their own, or use the Wizard and some Minions for some quick Tower damage.

A very common attack strategy is using 2-3 Huts that continuously deploy troops. Both of these cards are extremely strong against this. The Bomb Tower does splash damage and kills all three Goblins, or even four Barbarians with ease. Use Minions for backup. The deck on the right has a Lightning spell. Wait until the enemy drops two Huts, and zap them both with the Lightning.

Keep hitting Huts with Lightning and slowly take down towers, or defend with the Bomb Tower and attack from the other side with strong troops for a quick win.

Another popular attack is dropping huge tanking troops like the Giant, a Pekka, or Skeleton, often followed by the Witch or long-range troops like Archers or Musketeer. The same rules apply. Canon in middle to reroute them and do damage (drop Goblins or Minions on the opposite side) or a Bomb Tower to do massive damage.

Another option is to drop Barbarians or Minions right on top of tanking units, which will quickly die in a matter of seconds. If the enemy is bringing a heavy attack or using an Elixir pump, I’ll use my freeze spell to let the Bomb Tower deal severe damage. Or even the bomber with the tower to really wipe out anything big.

This approach is very elixir heavy for the attacker, and light for us to defend. Now counter with Hogs or even Goblins for some quick damage. Three Spear Goblins left alone can deal a quick 300+ damage to a tower, and cause the enemy to panic. Rinse and repeat for the easy victory.

Balloon or Giant Skeleton and Freeze

I see a lot of attackers using Balloons with a freeze, and I did too for a while, until I learned it was very easy to counter and was getting stuck in Arena 4. Make sure the Canon or Tower is in the middle to distract the Balloons or Giant Skeleton, and do what we’ve been preaching above.

Drop Spear Golbins, Wizard, or the Bomber to quickly take out these big units, but watch out or wait for that freeze spell. Even if you drop cards too early, there’s another 2-3 elixir card ready to be deployed for a fast recovery. The Minion Hoard is crucial here too, for taking out the Balloon which can take out a tower by itself in a matter of seconds.

Often times the enemy will use nearly all 8-10 Elixir with a Balloon and Freeze, for nothing. Then we have the advantage for a fast attack. Often getting a tower within the first 45 seconds, or after doing the same steps above on their second wave, which they often try again thinking they’ll get different results. 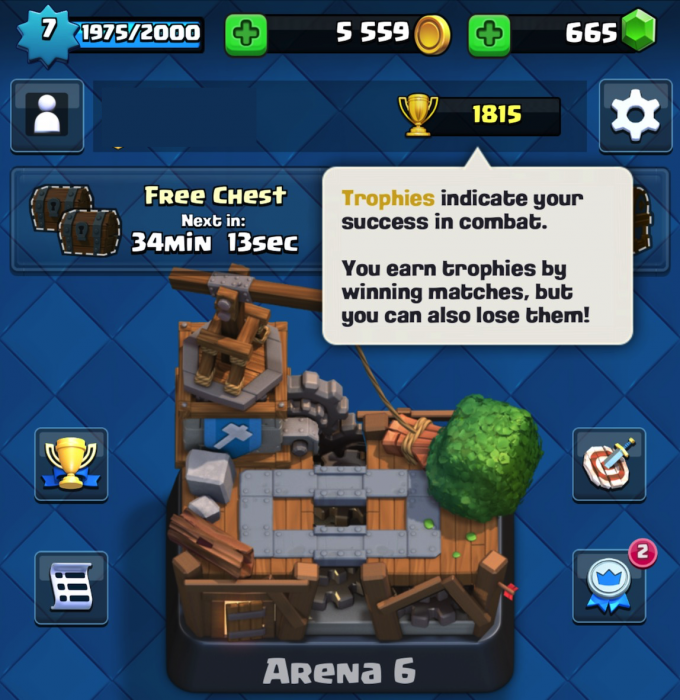 In May a huge Clash Royale update arrived that changed everything along with introducing six new troops or cards to the game. The Miner and Sparky are both game-changers, and the Furnace is a nice addition as well.

This update changed a lot of other troops too. Bombs and Canons are weaker and don’t last as long, and it also made the Royal Giant stronger and gave him a further shooting range. Making the Royal Giant the wrecking ball everyone expected, but he wasn’t. Now, with these latest changes the Royal Giant is an extremely deadly troop to use in combination with Barbarians leading the charge to take damage, or Minions to protect him from air attacks. Using the decks above reach Arena 7, unlock the Royal Giant, and use him to win in Arena 7 and push to Arena 8. With the deck below I managed to shoot past all my enemies, and push to 2,200 trophies. This means I now play in Arena 7 and occasionally Arena 8. Check it out below. 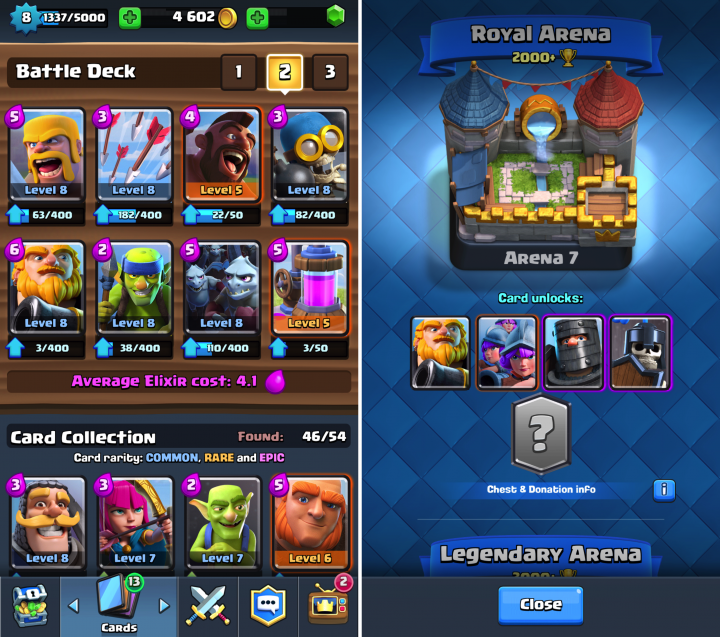 However, once you push with this deck to Arena 8 you’ll begin facing double Prince players, the princess, Ice Wizards and more and battles become more difficult. It’s still possible to win, but may need adjustments.

If you don’t have the Elixir pump it still works great, but takes more elixir saving. Swap that out for a Canon for defense, or a rage spell to get more from the Royal Giant whenever he’s on the map. We won’t breakdown all the counters with this deck, just know that it’s extremely capable. I start chipping away with goblins and minions, then wait til the 1:00 minute mark to drop my Royal and win at the end. Give it a try today.

Following the steps and decks above will almost certainly result in a lot of winning, 1700-1800 trophies if not more, and reaching Arena 6 and 7 with a little practice. Of course there is a small learning and timing curve, patience and strategy goes a long ways, and remembering what cards an enemy has, or already used. Below are a few other helpful last minute tips or suggestions to help use these decks to your advantage to win more battles in Clash Royale.

Of course there will always be different ways to win, or poor judgement and bad timing that will cause players to lose a game or two. Clash Royale is extremely fast-paced and has a lot of strategy. Don’t get discouraged if you lose 4-5 in a row, as later you’ll have a nice win streak and get right back where you started.

The big update that arrived in May added a lot of changes, but these decks are still very capable. The Canon and Bomb Tower don’t live as long so drop them at the last minute for maximum lifespan, and keep pushing to reach Arena 6-7 or more. Good luck and Clash On.