The hit mobile game Clash Royale received a big update on July 4th that added an all-new Tournament mode. Allowing gamers to fight endlessly against other skilled players to earn bragging rights along with extra troops and gold. However, the update has been riddled with problems, and so far the results are rather disappointing even after a quick bug-fixing update a few days later.

Clash of Clans was released back in March after a short beta period, and has instantly become one of the most popular games for Android and iPhone. With millions of Clash of Clans and Boom Beach players (also Supercell games) coming over to try the new real-time strategy title.

So far the new Clash Royale Tournament mode has plenty of promise, and is a great idea, but sadly there are countless complaints all over Twitter and the official forum. Ranging from cheaters, tournaments full, none available, low rewards and more. One could almost say Supercell really missed the mark, but future Clash Royale updates should make it even better. Read on for more details and for an idea of what to expect in a Tournament — if you can find one that’s open.

If you’ve been thinking about playing Clash Royale, or are a fellow player considering trying out the new Tournament mode, here’s what you need to know. Tournaments costs 500 gems ($5) to start, and go all the way up to thousands of dollars. The smallest Tournament has 100 players, which means the odds aren’t in your favor.

On July 4th the new Tournament mode was released, and these same match-ups had just 50 players and high rewards. However, they were all full, most players are unable to join and play, and if you did you probably encountered cheaters, doubled accounts and other problems. It’s safe to say this is a great idea that’s not being executed very well, and will hopefully be improved at time goes on.

Looking at the official Clash Royale forum or heading to Twitter we quickly realized we weren’t alone. Complaints are everywhere about everything we mentioned above. Here are just a few of many.

these tourneys are beyond horrific

hey guys I know the gems amount needed to start a tourney but can u please drop it a little bit because it's kinda expensive.

Starting a Clash Royale Tournament costs the average player $5 or 500 gems, which aren’t easy to come by during actual gameplay. Meaning most users are spending $5 to battle against 100 other people, and may or may not win anything. Of course that’s the nature of a Tournament, big risk and a bigger reward, but that’s another problem we’ll mention below.

Heading into the new Tournament tab in Clash Royale users will see a bunch of populated games that are available to join. Sadly, joining them is another issue completely. Almost all of them are full, even when they say 5/50 players, clicking join you’ll be greeted with a notification that it’s actually full.

I tried for almost 40 minutes to join a few Tournaments with no luck, and I’m not alone with my findings.

After seeing countless complaints on the forums Supercell quickly released another update today, July 7th. Now Tournaments minimum players is 100 instead of 50, allowing for double the amount of players to join. That doesn’t seem to help though, and as you see above users still aren’t able to find one and play. 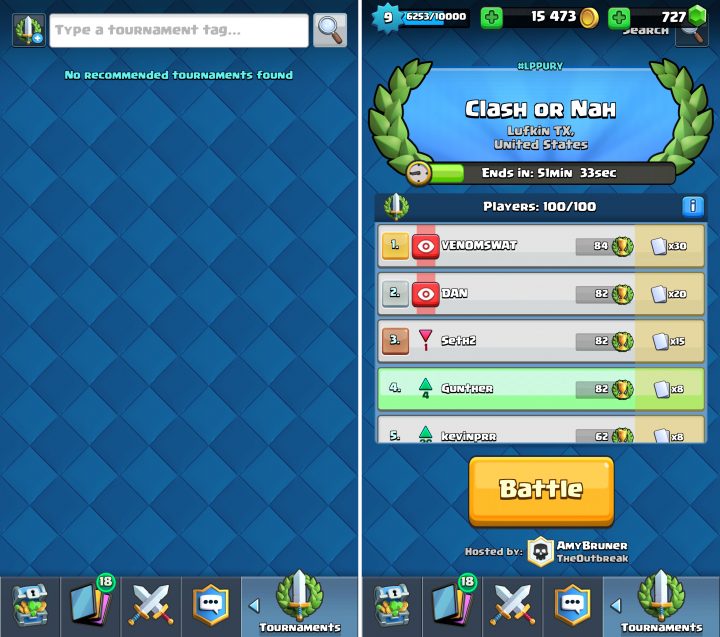 Zero Tournaments available AFTER the update

With millions of players from both Android and iOS surely there are some Tournaments that we can join right? Not so fast. After the update I looked for over an hour and found everything was still full, even after allowing 100 players instead of 50 for the smallest Tournament.

Eventually I was able to find a quick 1-hour match, won some battles and got into 4th place. I didn’t do very good and ended up in 7th, but not bad for my first time.

So far we’re still seeing complaints everywhere about Clash Royale Tournaments, with talks of cheaters, chests even being reset and rewards not being given out properly. The update made rewards arrive faster, but some are seeing the waiting clocks reset back to the beginning.

my tournament chest just reset itself?!? It had 6 minutes left, I come back half an hour later and I have to wait 2:42

Tournament Rewards Cut in Half

In a rush to fix the “Tournament Full” problem over the course of the last few days on July 7th Supercell doubled the limit to 100 as we said above, but cut all the rewards in half. Now 40 people can win, which is pretty generous, but most will only get four cards. Just four.

Additionally, we’re reducing the chest timers for 4-12 card chests – down to 3 hours (from 4).

As you can see some big changes were quickly made to fix the situation, but all the Tournaments being full are only half of the story. Looking around the Clash Royale forum it looks like most players don’t want to spend $5, $20, or $50 on a Tournament. Obviously making these free would be very generous of Supercell, but Clan Wars in their other popular games are free. What gives?

After winning a Tournament if you aren’t in the top 10 you’ll only win four cards. That isn’t very much for spending at least an hour battling continuously. One chest in regular multiplayer earns a lot more than that. There is a silver lining though. Supercell designed Tournament chests to have a higher chance of giving out rare Legendary cards, which is why only four cards are being given out to some.

At the end of the day Clash Royale Tournaments are still an excellent idea. However it isn’t really a Tournament. It’s just an all-out battle where players fight as much as possibly to earn the most trophies. There is no single or double elimination, no one can get kicked out for losing, you simply battle as much as possible until the timer runs out.

From what we’re seeing on Twitter and the forums the Tournaments being full isn’t the problem. It’s small rewards, cheaters, and the expensive $5 minimum asking price to start one. If Tournaments were 50-100 gems rather than 500, we’d see a lot more, and users wouldn’t be having a hard time finding one that isn’t already full. A filter for search would be great, too. 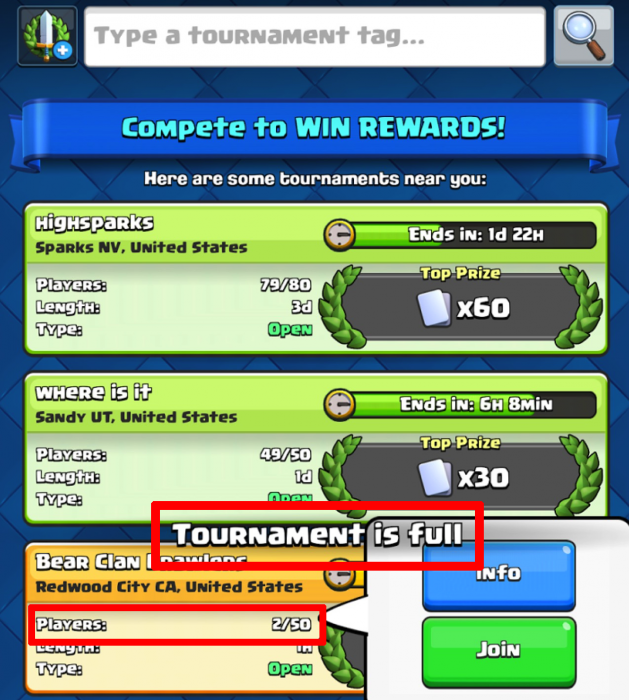 Supercell confirmed that this is essentially Tournaments v1.1 so technically still in the beta period, and they have tons of changes and ideas in the works and coming soon to make this an exciting expansion to what’s already a very successful game.

For now players will just need to sit tight, try hard to find an available Tournament, or give it another try at a later date after some changes and updates arrive. Are you enjoying the new Tournament mode, or facing many of these problems as well? Let us know in the comment section below.