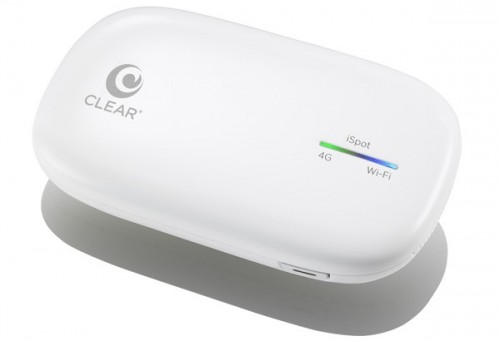 Clearwire, operator of the nation’s largest 4G wireless network, made a couple of announcements recently. First, in conjunction with Sprint, they’ve expanded their network to more cities. Second, they’re hoping users of iDevices will jump on that network with their iSpot mobile hotspot. Updated!

Clearwire has also announced an Apple-targeted version of their CLEAR Spot mobile hotspot called – wait for it – the iSpot (via Engadget). The iSpot can connect up to eight Wi-Fi-equipped Apple devices to Clearwire’s 4G network, though there appears to be nothing Apple-specific about this product except for its name and color scheme. Unless they’ve got some voodoo magic involved, I see no reason why it wouldn’t work with any Wi-Fi-equipped device.

One notable difference compared to their other Spots is that they advertise unlimited 4G data usage for $25 a month. This puts a big boot in the sack of AT&T’s current top iPad data plan of $25 a month for 2GB. Actually, I believe it solidly beats any mobile hotspot offer out there. The big limit, however, is that it’s 4G-only, so no 3G backup as with their CLEAR Spot 4G+ or the Sprint Overdrive. But for anyone living in an area covered by Clearwire (newly expanded), this is one enticing deal. If Clearwire could convince Sprint to put a 4G tower on their former HQ, which is within WiMAX range of where I live and work, I’d be first in line.

Update: CLEAR has tweeted that the iSpot will only work with iOS devices unless unlocked by a CLEAR rep, which then requires their $40 a month plan. Thus, it is pretty darn specific to Apple mobile devices with Macs also excluded. Still a good deal but whether it’s worthwhile depends on your situation and device count. Via Ars Technica.