Ever since Netflix updated their Android app to include more phones I have happily enjoyed going though all the old X-Men cartoons from the 90s. (They hold up well, but mostly to mockery.) Mostly I watch while lying in bed with the phone on the bedside table. But when I first attempted this, I discovered a design flaw in my HTC Thunderbolt. It has a nice kickstand, but the side it rests on is also the side where the USB port sits, resulting in what you see below. 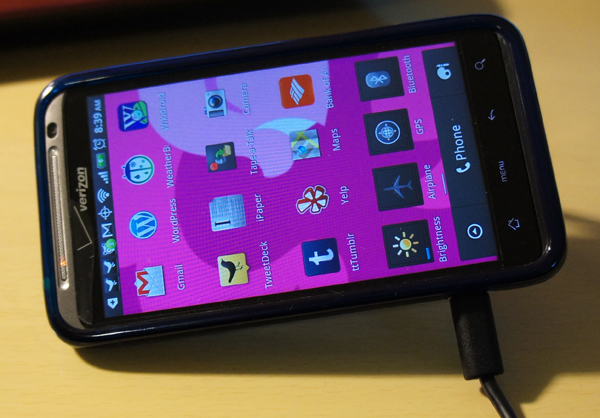 Not a pretty picture. I don’t want to drain battery just to watch movies, so what’s a girl to do?

Lucky for me I have this cool Universal Podium from Clingo.

I’d been using it at my desk to keep my phone propped up and in my line of sight in case of calls. It’s handy because the mount part sits on a swivel, which means I can tilt it at any angle and keep the phone in portrait or landscape orientation. Turns out it’s perfect for watching streaming media as well.

The unit itself is light — just under 12 ounces — yet stable. The metal base doesn’t have a huge footprint and therefore tucks neatly into a nook on my desk where I don’t have a lot of room.

As the name suggests, this product will work for any phone or small PDA/MID. Beyond phones, I’ve also used it as a handy mount for the Nook Color (Which is almost a little too heavy, but not quite) and other eReaders when I’m too lazy to hold them while reading in bed. In a pinch I’ve used it to stand my Galaxy Tab upright, but it’s not designed for something that big.

Clingo makes several cool products that utilize this green, sticky surface to hold devices in place. The stuff won’t stick or leave residue, though. And if it gets a little dirty and stops being sticky, all it takes is a quick wash to bring it back. I’ve had a different Clingo product for over a year and the sticky stuff still works.

Most of the time, the podium sits in my bedroom awaiting my phone and the next nighttime Netflix marathon. I may have to buy another for the office…

You can get a Clingo Universal Podium on clingo.com for $29.99.