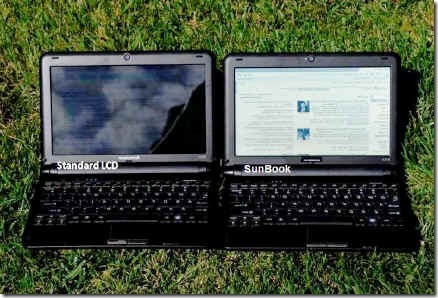 We’ve heard of Pixel Qi’s displays in the past, and the screen is being used on the Adam tablet by Notion Ink. Another application for displays that offer sunlight readability would be for netbooks for those who either work in the field or would rather do their computing in an outdoors space such as a park or beach as Pixel Qi’s transflective display shows that it can offer some of readability under sunlight that e-ink displays have promised, while still being able to deliver color and video that LCD screens offer.

The Clover Sunbook netbook is the latest to utilize Pixel Qi’s display. The 10-inch netbook comes with a single-core Atom processor and retails for nearly $800 for the privilege of being able to use the device in sun-drenched environments.