The iPad mini with Retina Display is now available to be purchased, if you can get your hands on one. Supply constraints look to make this a challenging task throughout the holiday season. This new addition to the iPad family of Tablets brings with it the Retina Display that so many felt the first edition was missing. It also brings big performance increases.

iPad hunting consumers will now be choosing between a new line of iPads that are essentially on par with each other from a spec standpoint. Thus the decision shifts to which size is right for which user and which use case. Comparing the new iPad mini with Retina Display with the previous generation is actually an easy task. The Retina Display is an obvious improvement and the performance increases are noticeable. Prices are different substantially over last year’s model.  You could almost end the comparison right there. But we’ll provide you with a few more details in case you are doing some comparison shopping. 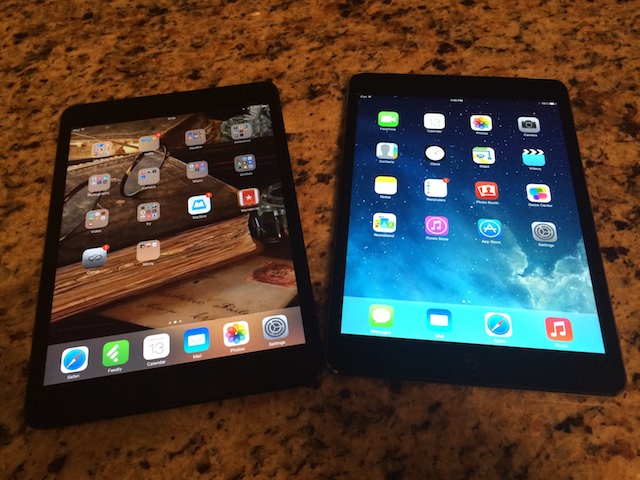 Both of the devices I am comparing are 64GB models with WiFi + Cellular.

I mentioned in a very early hands on post that the iPad mini with Retina Display felt surprisingly heavier than the original iPad mini. This morning it still does. Our minds play tricks on us. We’ve all tried to pick something up that we thought would be heavier or lighter and been surprised when the lifting occurs. That was my impression with the iPad mini with Retina Display. Subconsciously I expected the same feel as the previous model. I imagine after not having the original iPad mini around to compare with, this will be a moot point.

First time iPad mini buyers will think this is a very light weight 7 inch Tablet. But if you’re upgrading you’ll notice the difference. It’s not just the extras 29 grams. The device feels denser in the hand.  An interesting point of reference in this comparison, I’ve recently compared the iPad Air to the iPad 4. The iPad Air was a considerable change in size and weight from the previous generation. The lightness of the iPad Air was remarkable. The fact that they changes with the new iPad mini with Retina Display are minimal, I believe, make any small adjustments stand in a different way. Most users won’t be operating in the same context I am here, so keep that in mind.

As to the size and weight comparison specs here they are for the WiFi + cellular versions:

Note: For the non cellular versions subtract 0.02 lb for the iPad mini with Retina Display and 0.01 lb for the original.

If you pick up the two mini’s side by side you’ll also notice the iPad mini with Retina Display is slightly thicker, but like with the weight I think the differences are noticeable only in comparison. 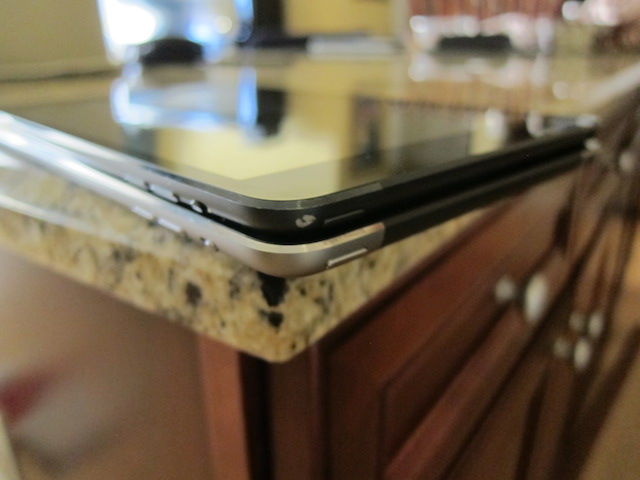 iPad mini with Retina Display is on the bottom

There’s not much difference to notice regarding form factor. All of the buttons and the one Lightning Connector Port are in the same place.

Instead of black and slate or white and silver your color choice is now Space Gray or Silver. 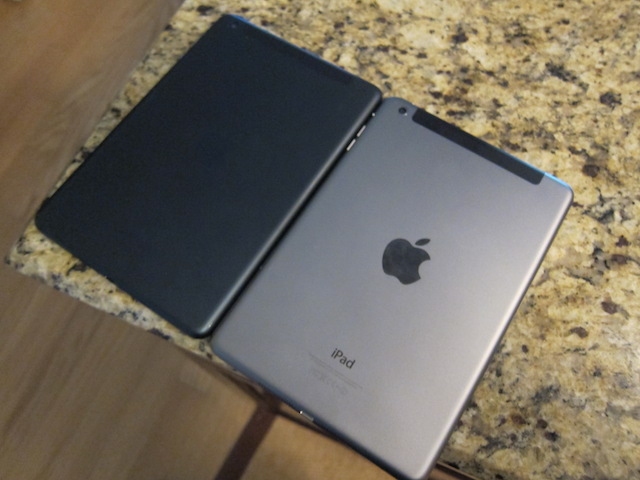 iPad mini with Retina Display on the right

You’ll notice that the Space Gray option adds a slight metallic look to the rim around the display’s chamfered edges. 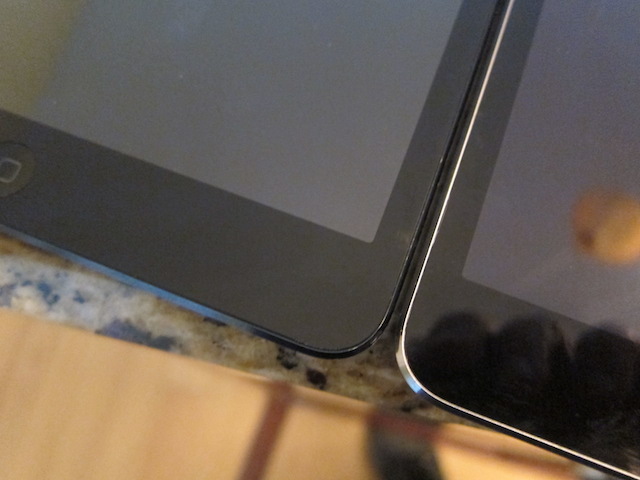 The iPad mini with Retina Display is on the right

The iPad mini with Retina Display joins the iPad Air and the iPhone 5s with all three now running the new A7 chip with a M7 coprocessor alongside. While that sounds like parity across device categories, there are some slight differences. The iPad mini with Retina Display is running at 1.29GHz while the iPad Air is running at 1.39GHz. The iPhone 5s clocks in at 1.30GHz. The original iPad mini was running a Dual-Core A5 chip, which was a generation behind its then contemporary iPad 4 and iPhone 4 siblings, both running the A6. The A7 adds 64 bit architecture to the mix, along with an improved instruction set. The M7 chip is used to gather data from the various sensors on the device. We’ll have to wait and see what the M7 means for the this device and its siblings until developers take advantage of it. In addition, I’m curious to see what the M7 actually means for the iPad line versus the iPhone line. We’ll have to wait and see what the 64 bit A7 chipset means as well.

Numbers are numbers but in the real world with real devices in your hands the performance jump is more than significant and easy to notice. Call it night and day in most instances. This was to be expected and it makes an already appealing form factor even more so. You can really see the difference when you run Apps like Pages, Keynote, Numbers, GarageBand, iPhoto and iMovie that are coded for the 64 bit architecture. Other Apps have new life as well. The videos below will show you the difference while opening some common Apps.

This first video shows two Apps, Flipboard and Feedly opening on both devices.

This second video loads The Bards Tale an asset heavy game for iOS.

This third video loads Infinity Blade 3 and was coded to work with the new 64 bit architecture.

This fourth video loads Safari with your favorite Gadget site.

This fifth and final video loads a Keynote presentation.

One place you notice the difference in speed is snapping a picture with the Camera App. Everything just seems to move much more quickly. Speaking of cameras, the only fundamental change in the hardware is that you can now use a 3X zoom while taking video.

Read: A Tale of Two Tablets: Comparing the iPad Air and the iPad 4

The iPad mini with Retina Display now contains the heralded display it is named for.  You can now see crisper text and clearer images. Yes, the screen looks fantastic. For some context: My eyes don’t show the great distinction that the Retina screens bring that others see. I can notice the difference, but I’ve never felt that it was that significant. The iPad mini’s non-Retina display still holds up quite well in my viewing. Your eyes, and obviously many others may be different.

Here are the numbers:

The color temperature of the screen on the iPad mini with Retina Display is slightly warmer than its predecessor. Given that we’ve heard about these displays having issues that may be hindering inventory reaching stores, don’t be surprised that different screens from different manufactures will have different display temperatures. 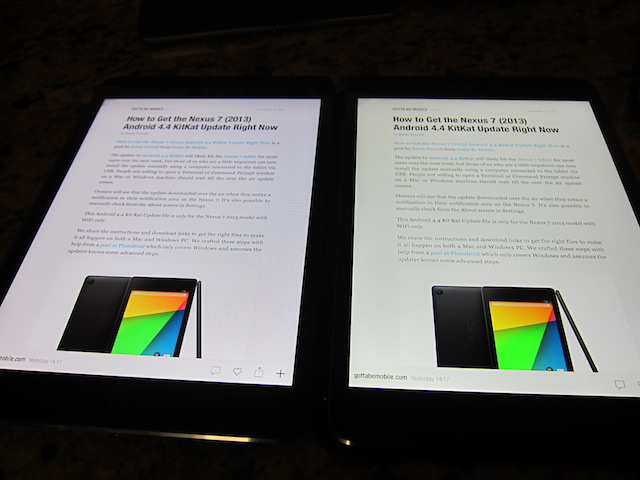 iPad mini with Retina Display on the right

Apple is touting improved WiFi reception for the iPad Air with the distinguishing feature being MIMO (multiple-input and multiple-output) technology. Simply put, if you have a router that supports MIMO you’ll see better throughput because there are multiple antennas on both the transmitter and receiver side. So, this is a benefit that will only make a difference if you have a MIMO equipped router. MIMO technology has been around since the days of 802.11n standard so it is not new technology. If your router has multiple antennas sprouting out of the top and supports 802.11n technology you have a MIMO equipped router. Apple’s Airport Express and Airport Extreme routers also support this. Curiously though, Apple did not include capability in the new iPad Air for 802.11ac spec, which is supported by its latest Airport Extreme router which supports the 802.11ac standard.

Using the same Airport Extreme (not the newest model but the previous one that supports 802.11a/b/g/n), I ran the same tests with both mini iPads that I did with the iPad Air and the iPad 4. Fundamentally there were no differences when I ran Speedtest.net. I downloaded the Bard’s Tale, a very large(1.44 GB) asset intensive game separately on both devices. On the iPad mini the download took 11 minutes and 14 seconds. On the iPad mini with Retina Display the download took 10 minutes and 40 seconds.

One of the ways I judge battery life on devices has to do with my morning routines. After a shower and a cup of coffee I do three things routinely on an iPad: check email, check various news sources on Flipboard, and then do some additional web browsing to see what’s up in the world. This morning I followed this routine with both devices.  The iPad mini with Retina Display battery life meter showed that it had decreased from 100% to about 96%. The iPad mini decreased to 93%. That is what I have been seeing on a typical morning with the iPad mini. The iPad Air is a brand new device and it takes some time after setting up a new device for things to settle in. Call this an interesting first morning observation.

In first observations Apple has delivered on the upgrades that it promised for the iPad mini with Retina Display over the previous generation. The new 7 inch Tablet is faster, has a higher resolution screen and the new chip architecture promises more for the future in this the year where Apple laid out a “forward-looking” theme. The performance increases are very noticeable, as they should be. Adding the Retina Display required some impressive behind the scenes engineering to keep battery life on par with Apple’s 10 hour benchmark while bringing that much desired Retina display to the device. Based on early testing here things are as advertised. Regarding the Apple family of iPads, last year was the first year we saw two different iPads. Both were differently spec’d out. Yes, the size was different, but beyond that they were two different iPads that performed differently. This year the new additions to the family feature two different sizes again. By and large, though, the iPad mini with Retina Display is the same iPad as the iPad Air with the only notable difference being the size. So for consumers the choice is all about which form factor suits your needs best.