RealVNC, a British company and a leader in remote computer control, just announced that it has signed a deal with Land Rover and Jaguar to offer its VNC Automotive product in 2014 vehicles. VNC Automotive allows the operator of the vehicle to control his or her mobile phone from the touchscreen integrated in the vehicle. Unlike other systems though, this control is virtually unlimited because it relies entirely on the phone for the in-car entertainment system. This should be the first example of complete phone integration in a vehicle of this type. Completely device agnostic, it will be compatible with all phone manufacturers and operating systems.

Once connected to the vehicle, the VNC Automotive system will replicate your mobile’s screen on the main screen in the vehicle. If you touch the screen to open the music app for example, the music app will open on the phone. You will be able to browse your playlist just like you were using the phone directly. When you decide to play a song, instead of it being piped through the phone’s speakers, it will utilize the stereo system in the vehicle to play back the audio.

Where the system should be extremely powerful is in the use of the navigation function. Manufacturers have been struggling for years to perfect the navigation system and control in their cars, and with the critical reviews of Ford’s MyFord touch system and Cadillac’s CUE system, RealVNC believes their system is optimal. For someone using an Android device, they will be able to utilize the VNC Automotive system to use Google Maps for directions, seeing what they would normally see on their screen on their phone on the navigation screen in the car. The voice directions would be provided by Google, and all of Google’s advanced features, such a real-time traffic would work. If you were using Waze, you would be able to tag trouble spots from your navigation screen instead of relying on your phone to be mounted somewhere in the vehicle. 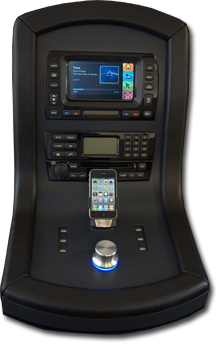 Smartphones and their associated software are updated more frequently than many in-vehicle solutions, so this system should be easier to keep up-to-date. It should also help keep the entertainment system current in vehicles that are rapidly advancing. RealVNC’s hope is to make this system available to all manufacturers, potentially removing the “What kind of navigation software does the vehicle use?” from the car purchasing equation.