The name is a lawsuit waiting to happen, but the concept is brilliant, and I’m not just saying that because I’ve been thinking the same thing. Behold the SmartBook, a concept phone + tablet combo by METATREND that pairs a slate tablet with a phone handset that folds out into a QWERTY keyboard. 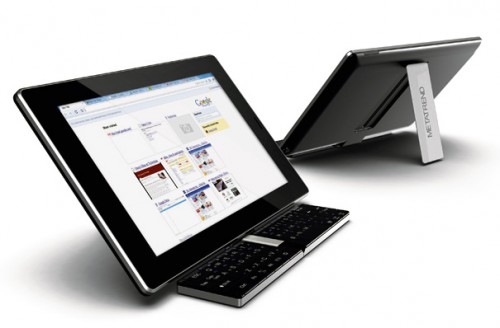 Before you pull out your checkbooks, this is just a concept and METATREND isn’t even a manufacturer. Still, I think it’s a concept worth pursuing. The idea is the slate has a kickstand for working at surface and magnetic docking point where the handset can attach when it’s unfolded into a keyboard. Takes my idea of using a phone to control and sync with a tablet to an even closer relationship with the phone unit acting entirely as an input device for the tablet, even acting like a Bluetooth handset with calls going through the tablet’s wireless connection.

Check out METATREND for their full vision. Via Yanko Design and Gizmodo.