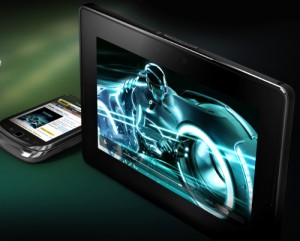 The introduction of the BlackBerry PlayBook seems like an eternity ago. The QNX powered tablet was first introduced at DefCon 2010…as in September 2010, long before the Apple iPad 2, Motorola Xoom or HP TouchPad tablets had seen the light of day. But BlackBerry fans won’t have to wait much longer to get their hands on one. We’ve confirmed with multiple reliable sources with first-hand knowledge and involvement with the launch that April 10 is the PlayBook’s official availability date.

RIM is busy making the rounds again with the PlayBook. It held a PlayBook event in New York earlier this week and is in San Francisco for GDC 2011. Our own Chuong Nguyen interviewed a RIM spokesperson yesterday (video below) who was mum on an official release date.

At this point, it would be good if RIM would actually tell its fans when the PlayBook will be released. It’s been almost six months and the guessing game is getting kinda old for all the BlackBerry diehards who put off buying an iPad or Galaxy Tab in favor of waiting for the PlayBook.

RIM will likely announce the official April 10 launch date at CTIA in Florida later this month. Tablets will be a big topic at the show and there isn’t a bigger stage before April 10 for RIM to announce availability.

The iPad 2 is the hot topic this week, but RIM will surely grab a lot of attention, especially amongst corporate types when it hits shelves on April 10.