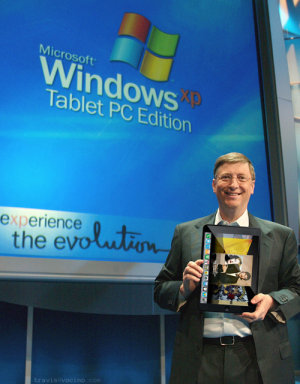 Been waiting and waiting for some new “insider” to step forward, but it seems everyone is onboard with the report that Apple’s iPod event on September 9th (09/09/09) will not introduce the mythic tablet. Guess this means we won’t see one until next year (or the year after that, or two years later, etc., etc.) At least not a real one.

In the meantime, might I suggest checking out Gizmodo’s mockup contest for showing the Apple Tablet being used in real life. There are a few entries from the usual haters of Apple, Microsoft, and/or tablets, but many are insightful and true-to-life (sadly in some cases). I particularly like #53 (shown here), which I interpret as a hopeful harbinger of the Apple Tablet helping the original Tablet PC vision come to pass (but may have been created as a slam).

As far as what will be at this event, safe money is on the well-predicted new models of iPod touch and nano with cameras and increased storage and a new version of iTunes sporting that rumored Cocktail functionality. Wish I could be excited, but the anticipation has long built and is now long passed. Hope they roll out something unexpected even if it’s not a tablet (though a tablet would be ideal).