Sales figures at big box retailers like Best Buy, Walmart, and Fry’s Electronics suggest that the TouchPad is lagging behind HP’s and retail expectations for the debut webOS tablets. The situation is so bad that retailers are now asking Hewlett Packard, which had acquired webOS from its Palm buyout, to take back inventory of the TouchPad because the tablets simply have not sold and are occupying valuable retail and shelf space.

Best Buy, the nation’s largest big box electronics retail chain, had reportedly ordered 270,000 units of the tablet, and has only managed to sell only 25,000 units. Sources to Business Insider and All Things D say that the 25,000 units sold is a generous figure as it doesn’t even account for exchanges or returns of defective units, and the Wall Street Journal’s tech blog is calling it the ‘OuchPad.’

The situation is so bad that Best Buy is wanting HP to take back the tablets, and HP, which is hoping things don’t get worse, is asking the retailer to be patient.

The tablet had debuted to lukewarm review and emerged at a time when consumers have a lot of choice between the iOS-based iPad, various Android tablets of varying screen sizes and price points, the BlackBerry Tablet based on the QNX operating system, and varying assortments of Windows tablets and slates. The tablet had debuted at a $500 price point for a base 16 GB WiFi-only model, and $600 for the 32 GB WiFi-only version. However, since it debuted, various retailers have offered different price cuts and discounts for both models. 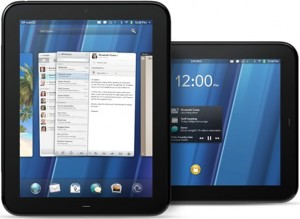 The problem with the sales figure may not be the tablet itself, but rather HP’s pricing strategy behind the tablet. After its retail partners have offered discounts for the TouchPad, HP had followed with its own $100 discount and that price cut is now a permanent discount for both 16 and 32 GB variants. Consumers, as a result of rapid price cuts, are perhaps waiting to see if the TouchPad’s price will drop further before adopting the tablet.

The TouchPad’s slow sales is not at all surprising. When Palm had debuted the original Palm Pre several years ago with the webOS operating system to compete with the Apple iPhone, the device was met with a lot of enthusiasm. However, the Pre’s sales figures were never high, and Palm later blamed its exclusivity with U.S. wireless carrier Sprint as the reason why it never reached greater market share.

In an age of stiffen competition, being different may not be enough. While webOS products and the OS itself are cool, interesting, and ‘different’ enough from the Android and iOS competition, what Palm and HP really needs to do is deliver products faster, bring more value, and deliver ground-breaking features that will be ground-breaking when the product launches into the hands of the consumers.

When Palm announced webOS on the Pre several years ago, the synchronization engine with various calendars, address books, and social networks were cool. Synergy really offered consumers a way to keep everything synchronized, whether it’s corporate Exchange emails or Facebook calendars. However, in the time it took Palm to make the Pre available to consumers to buy, HTC and Android caught up with Facebook synchronization and MySpace integration, effectively negating the differentiated value that webOS was set on delivering.

The same thing happened with the TouchPad–the device was announced in February but HP didn’t launch it until July, and in that time, RIM and Google launched a slew of slates and the iPad 2 was sent out of Apple’s gates to dominate the market, eroding any competitive advantage that the TouchPad may have had if it was available sooner for public consumption. Had HP launched the device sooner, it’s cards UI may have been a differentiating factor, but as it stands, RIM had done the cards UI quite well on the PlayBook, which had come to market a few months ahead of HP’s darling.

So what’s webOS’s future? HP had made a big investment in webOS as part of its mobile strategy, and I don’t think HP wants to ditch that investment effort quite yet. The company has hinted that it may be opened to licensing webOS to other hardware partners to use. Given the recent Google-Motorola announcement may have left some Android manufacturers feeling a bit used by Google, and Nokia’s deep relationship with Microsoft on the Windows Phone side, perhaps HP could persuade some of those OEMs feeling hurt from the fall outs created by recent alliances in the mobile space.

Simply slapping the OS onto printers and computers may not do much aside from giving HP an edge to boast about ‘total webOS devices and users’ on the market in order to convince developers to come to the platform. HP really needs to re-think its overall strategy and launch products in a timely manner, and if it can’t do that, then perhaps giving HTC, Samsung, LG, Huawei, and Sony Ericsson a piece of the webOS pie may help the ecosystem.