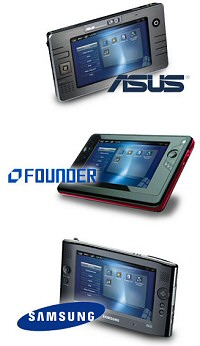 Several interesting items recently leave me contemplating Ultra-Mobile PCs in my continuing quest to ultra-mobilize (is that a word/verb?) my work and play flow. After conducting a pretty thorough post-mortem of how my Tablet PC usage worked (very well, thank you) in my recent experience producing and directing Othello, I’m still, and further, convinced that a UMPC will, someday fit into my work and play. But, as I said, several other recent news items also add to the contemplation zone. Steve at Carrypad has published a very thorough review of the Raon Vega. In my mind this is an “almost” or “faux” UMPC that doesn’t quite fill the bill. Why? It only comes with XP Home as an OS. That said, Steve does an excellent job of pointing out the pros and cons of Vega and the fact that it could be a good companion computer. As Kevin Tofel points out, in some respects, that is the UMPC concept, but I’ll talk more about that later.

Also, this morning James Kendrick links to some Engadget info about the S-XGen mobile device that looks to debut next year. It runs Windows CE, and the fold out design certainly look more Origami-like than anything that has followed the Microsoft specs on the market so far. Intriguing, but also puzzling. Windows CE? Not for any of my ultra-mobile heavy lifting thank you.

And GBM’s own Dennis Rice in his explorations of the TabletKiosk eo i7210, talks about data entry for him on the eo being a “pain in the keester.” We’ve certainly seen other reports of this as well. And as I’m composing this post, Kevin Tofel has posted a very interesting think piece on the UMPC/Origami six months later that also focuses on data entry.

In my quest, as I’ve been following others vicariously, these and several other nagging points keep me from taking the plunge, (beyond the fact that I believe what we see on the market now will be drastically different next year after Vista’s release.)

I’ve stated before that I think a UMPC could very easily serve my needs in a rehearsal environment for note-taking and research, as well as for note-taking in meetings. I still think that is true. So, what’s a UMPC/Origami going to need for me to take that plunge? 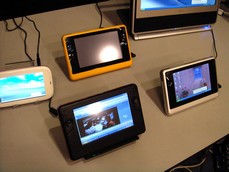 First of all, none of the “faux” UMPCs for me. I’ve had my hands on the Sony UX180P, and it can’t fill the bill. While small hand-held mobile devices seem to pop up each week, I need a device that will run Vista with all of its Tablet PC goodness intact. That of course means a least a gig of memory, and of course it needs to be able to deal with digital ink in the same manner as a Tablet PC. That leads to:

Second, ink registration issues need to be resolved. Again, remember this is focused on my usage scenarios and yours may be vastly different. I am in a much loved and very much ingrained habit of taking notes in digital ink with a pen using OneNote 2007 in one of my primary work scenarios. Registration issues (ink spilling on the screen from a stray touch or palm brush) make this a problem. At the moment, this is a show-stopper for me. And then of course there is: 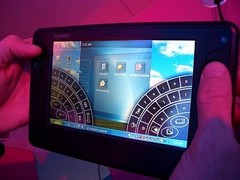 Third, Data Entry. No, I’m not looking for a UMPC with a keyboard. I can (and would) be happy with a third party solution as I anticipate using a UMPC as a companion device. In fact, I just don’t think that a UMPC or “faux” UMPC with a keyboard solution will be better than a third party solution simply because of the compromises that OEMs have to make for size. That and the fact that my hands really don’t work well with small keyboards. Solve the registration issues mentioned above and we are half way there. Solve data entry via touch and we get closer. I haven’t seen any real enthusiastic supporters of DialKeys, in fact I’ve seen more negative than positive commentary about that data entry method. Ilium Software’s Inscribe shows some promise. (Check out Dennis Rice’s InkShow about Inscribe), but again, a coherent, native solution for the UMPC should be fundamental and there out of the box. Speaking of out of the box, I should be able to boot up, enter data with the pen or stylus (these can be improved as well) or with a touch option without any difficulty whatsoever. I don’t think that exists now with that kind of transparency.

Fourth, rotation, rotation, rotation. I haven’t seen anyone completely happy with screen rotation on these devices. The UMPCs I’ve held in my hand beg to be rotated into portrait mode for note taking. While there is a URotate utility out there, I don’t need, nor want to load up a device with a utility to perform a function that should be native to the device. Even Samsung’s Q1, which comes with a rotation utility seems to offer some issues here.

I could add a few more items to the must-have list, (battery life, price point, etc…) but they’ve been chronicled well by myself and others, and I don’t see huge improvements in the near future in these areas, so I’m semi-resigned to accept what exists on those fronts, at the moment. That said, as a companion device, I’m not going to invest more than $1,000 and in fact, I’d like to keep that below $750. (I know, I’m dreaming.)

Media and playtime. One of the areas where I’ve seen good feedback on is media playback. This is also a crucial element in my decision process. I’ve had to discard my iPod, due to controlled obsolescence and its failure. And quite honestly I’m not that interested in biting the Apple again, or looking at a Zune device, when I can essentially get the same functionality out of a UMPC for music, and a larger screen to watch video. One less gadget (and accessories) to tote around. So, I think I’m safe with where we are heading on this front with UMPCs.

But perhaps the one sticking point that I doubt will change in the forseeable future is to be able to put my hands on these devices side by side in a retail outlet. Again, I know I’m dreaming here. But each UMPC, much like their older cousins, the Tablet PC, has a unique feature set, and from what little experience I have had hands on, getting a chance to actually go hands on with these devices is important to me. Intriguingly, though, I think in the days, weeks, and months ahead, it will probably be easier to lay hands on with the “faux” UMPCs than the real thing.

I’ve mentioned the phrase companion device several times. That is how I envision a UMPC fitting into how I work and play. I’ll still have a Tablet PC on my desk and still use it in some mobile circumstances, but I’m looking for the UMPC to be an adjunct to that usage and allow me to travel, or go to rehearsal, or attend a meeting, with a lighter gadget bag. But I will still need that same functionality that I can get with a Tablet PC. Again, that rules out the “faux” UMPCs in my case, and it rules out any full-fledged UMPC that can’t live up to what I’ve outlined above. Perhaps I’m too picky. Something tells me I’m still a ways off.

In the days to come, I plan on writing a similar post about what I’m going to need to see in my next Tablet PC, as it is almost time to send my trusty Toshiba M200 out to pasture.