The 1988 NES classic shooter Contra is now available on the iPhone and iPad as Contra: Evolution, with enhanced graphics and the same classic gameplay.

Contra: Evolution actually debuted in China earlier this year, and after a brief appearance in the U.S. App Store, it’s finally available for everyone in the U.S. The game adapts the simple controls of the 80’s classic for the touchscreens of the iPhone and iPad with a virtual joystick and virtual buttons. 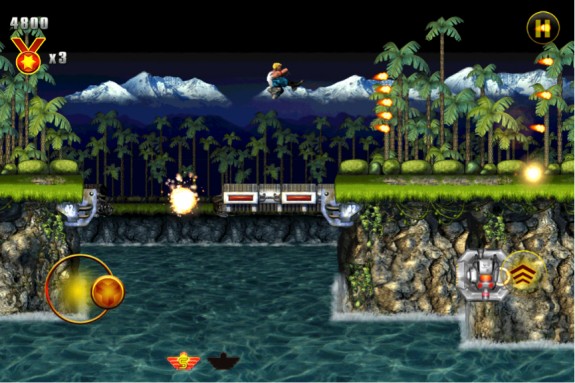 Unfortunately, the virtual sticks make it hard to enter the famous Konami code that started with Contra. The code would give gamers 30 lives to start the game off with instead of the typical three. For a game as difficult as Contra, the extra 27 lives are a blessing and almost necessary for some gamers. Many will find themselves going through three lives within a few missions.

The reincarnation of the classic game comes just a few months before Apple wil introduce Made for iPhone controllers for devices running iOS 7. The new official controllers should make Contra: Evolution just as much fun as the 80’s version of the game.

Contra: Evolution and iOS adaptions of other classic home console and arcade games, such as Metal Slug X and more recent games like Grand Theft Auto: Vice City, will benefit greatly from official iOS controllers. Often the only thing that makes those games frustrating on iOS devices are the virtual controls. It’s hard to translate physical buttons to virtual controls, especially for complex or fast-paced games.

Contra: Evolution is available now for iPhone and iPad. The iPhone version of the game costs $0.99 while the iPad version costs $2.99. Both games feature the same four playable characters (including two new ones) and power-ups. The only difference between the two versions is the size of the screen users can play them on.