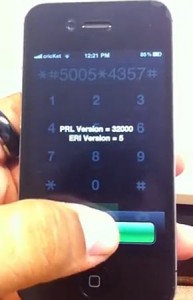 While Cricket didn’t land an Apple deal to offer an iPhone 4 on its regional network, the regional CDMA carrier isn’t one to shy away from capitalizing on Verizon’s Apple deal to re-flash a Verizon Wireless CDMA iPhone 4 to make that device compatible with its own network, based on the same technology rather than AT&T’s use of GSM.

Unlike larger national carriers, Cricket and regional rivals like MetroPCS offer contract-free plans where users pay month to month, similar to pre-paid, but consumers have to pay for their devices unsubsidized at full price as there isn’t a two-year contract. In terms of bringing the iPhone 4 to Cricket, the process includes jailbreaking the iPhone and then having a sales rep at a Cricket store flash the phone with Cricket’s firmware to make it compatible for use with its network.