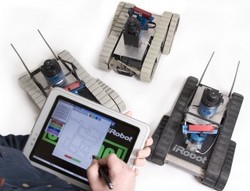 So if you have an army and use robots to head into dangerous ground you might want to take a look at this. iRobot’s Sentinel is an applied research project that allows multiple robots to be controlled by a touchscreen Tablet PC.

The iRobot PackBot Tactical Mobile Robot has been effectively used in both Afghanistan and Iraq to perform reconnaissance and bomb disposal missions.  These PackBot robots posses little or no on-board autonomy and are directly controlled by a remote human operator.  The operator continuously monitors a live video and telemetry stream from the robot and continuously issues drive commands to the robot, much like a remote-controlled car.  This is the standard mode of operation for today’s fielded mobile robots.  Future generations of mobile robot systems will include multiple, coordinated mobile robots– each with increased on-board autonomy –enabling them to operate for extended periods of time outofcontact with any human operator.

The folks behind iRobot are the same folks behind the Roomba vacumn cleaner robots. I guess whether you’re cleaning up a living room or a bomb site, the principal is the same.

Thanks to GBM Forum user Pro-Crastinator who provided the Gizmodo link. CrunchGear also has more.