On the year anniversary of Corning introducing us with Gorilla Glass 2, it appears that it had worked hard to bring even additional improvements to the scratch-resistant glass and is now bringing us Gorilla Glass 3. The third-generation of smartphone and tablet glass, which will be announced next week at the Consumer Electronics Show in Las Vegas, will come with new durability enhancements for accident-prone users of mobile gadgets with large glass windows. 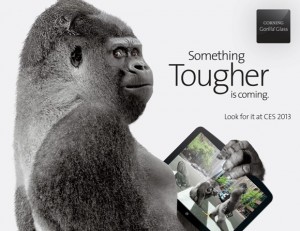 And beneath the cosmetics of a scratched screen, the major thing will be Gorilla Glass 3 will be stronger after the panel has been damaged. The third-generation panel is said to retain 50 percent more strength after the glass has been flawed.

Gorilla Glass, which has been used but not marketed by name on Apple’s iPhone, has gained popularity in consumer smartphone and tablet release. Though there are competitive strengthened glass solutions on the market, Corning has made a name for itself in the industry despite not selling or marketing its glass directly to consumers. For example, when Samsung announced that the Galaxy Nexus would use a chemically-strengthened glass, but not Gorilla Glass, consumers immediately questioned the glass on the Galaxy Nexus.