We already know that Microsoft’s Cortana personal assistant might be the first things that draws users attention on Windows 10 release day. A new leak has made that launch a little less exciting for some. Months after revealing that Cortana would have companion apps on other platforms, today Cortana for Android, that is the app for Android powered smartphones, leaked.

Website Techweez shocked everyone late this afternoon when it revealed the first pictures of the Cortana for Android app that users can expect to be available in a few weeks. The site says it was able to “play around” with the beta version on a Samsung Galaxy Note 3 running Google’s Android 4.4.2 operating system. 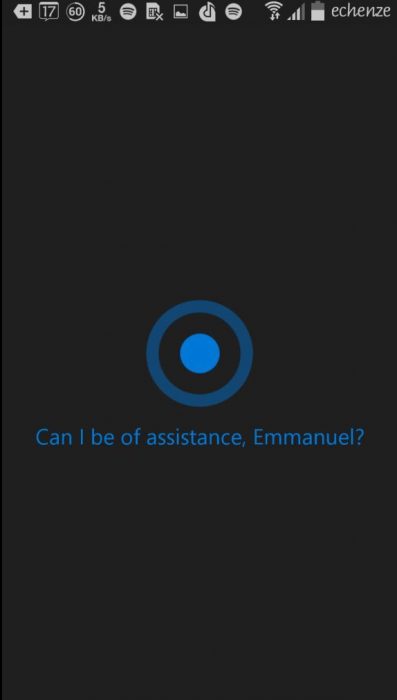 Images of Cortana for Android, posted by TechWeez

The pictures the outlet provides breakdown the entire Cortana for Android setup and experience. When users download the app they’ll need to agree to Microsoft’s Terms of Service and then provide Cortana with a name they’d like to be called. Then they’re asked to provide the username and password for their Microsoft Account, just like all of the apps coming from the company lately.

Cortana acts as a digital assistant. She provides users with the information they request and uses what she learns about users to give them information she thinks they need. On Windows 10 release day users will find a Cortana experience that connects directly to their email and calendar apps to send messages to contacts and provide a breakdown of the day’s events. She can set reminders and alarms. She can even play specific albums or songs on request. On Windows 10 and Windows Phone she can be opened automatically with a simple voice command.

The Cortana for Android app isn’t as fully featured, but does require a fair amount of permissions on Android to operate correctly. Installing the apps requests permissions for deleting from SD card, disabling screen lock, setting an alarm, creating accounts, checking network connectivity, pairing with Bluetooth devices and syncing settings.

Many assumed that Microsoft would make Cortana available for iPhone and Android in the next few weeks anyway. The company says it’s bringing Cortana to more platforms to compliment the Windows 10 experience anyway. TechWeez seems to have taken care of the unofficial Android release on their own. The site has directly links to the Android APK file that users need to get Cortana. We haven’t posted them here by you can find them on their site. Users will need to dive into their system settings and configure their Android device to accept app installs outside of the Google Play Store. This isn’t a setting that’s usually turned on.

Cortana is one of the connectors that Microsoft hopes will draw people into its ecosystem. Using the app doesn’t cost users a dime, but does require a Microsoft Account. Cortana is actually a personality and front-end for Microsoft’s Bing search engine. The more people use Cortana the better she becomes and the more Bing grows in search rankings. Cortana is the name of artificial intelligence in the Halo series of games.

Besides coming to iPhone and iPad, Microsoft has plans to introduce Cortana onto other devices soon. Besides Windows 10, Cortana is set to come to Microsoft’s Xbox One console sometime this year. Settings, alarms, reminders and information between shared with one version of Cortana gets synced to the other versions of Cortana effortlessly.