According to The Verge, the documents show two smartphones code-named Odyssey and Marco. Both devices use the same Qualcomm MSM8960 chipset with a 1.4GHz processor that Microsoft used to test Windows Phone 8 devices. Samsung scheduled both devices for a Q4 2012 release. 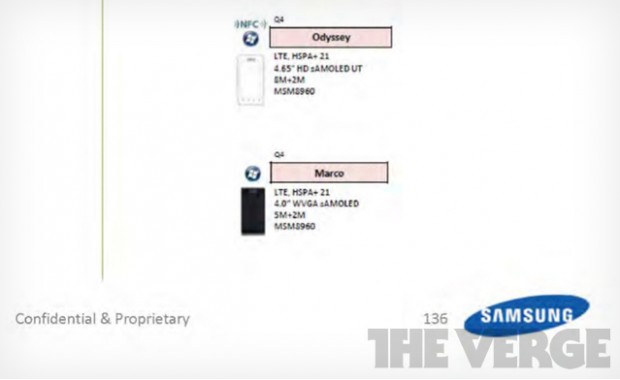 The Odyssey is the higher-end phone, with an “iconic design.” It has a 4.65-inch HD display, which is the same size as the 720p display on the Galaxy Nexus, including the virtual buttons. The Odyssey uses 4G LTE and HSPA+, which likely means it will come to AT&T, just like every other Samsung Windows Phone. The phone also has NFC for mobile payments, and 8MP rear-facing camera, and a 2MP front-facing camera.

The Macro looks like a mid-range phone with a 4-inch WVGA (480×800) display. It has the same dual-core processor and radios as the Odyssey, but lacks the higher-resolution display and NFC. The rear-facing camera on the Macro is also a step down from the Odyssey, it only has 5MP. We know megapixels aren’t everything in cameras, but we expect the mid-range phone to have a poorer camera compared to the high-end phone.

When the new phones launch later this year they will face stiff competition from other Windows Phone 8 devices from Nokia and HTC. The phones will also be up against the iPhone 5 which will likely launch in September, two months before the rumored November launch of Windows Phone 8.