The folks at Patently Apple have dug up another crazy Apple patent. This time it’s for an inductive charging solution, but definitely don’t call it wireless. Meanwhile, wireless power developer WiTricity has posted a new demo of their truly wireless system that shows us how a battery-free Mac system could work.

Up first is a patent that appears to have been born in Apple’s iPod era. It describes a method to charge an iPod using headphones as the charging cable. In one iteration, the headphone cable is wound around a charging tower, effectively turning it in the induction cable in the system. In another, the ear pieces act as the power connections. They are interesting, but I wouldn’t hold my breath waiting for these to hit the market. 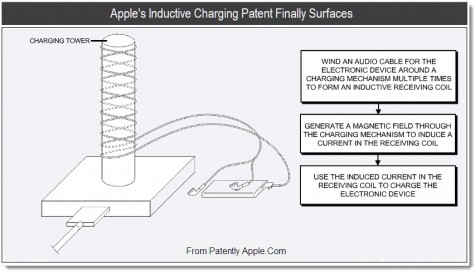 A more likely scenario is one presented in video by WiTricity, a company working on wireless power solutions. In the video, they show us the usual wireless charging pad (powering two Android tablets) with their added feature of ranged transmission, up to several inches in the demo though their aim is to get that to meters. Later, they show us a mock-up Mac environment consisting of an iMac with a wireless power transmitter and keyboard and mouse both receiving power when the computer is on. No batteries, the peripherals run on power streamed from the computer. Tossed in the mix is an HTC Flyer equipped with a receiver. Very impressive stuff.