As leaked last week by payment service PayPal, Valve has kicked off its Steam Winter 2015 sale on games for Windows PCs, Macs and devices running Linux. All told, there are some ridiculously good deals to be had on some of the latest titles through the sale. Some of them are so good that the sale has broken Valve’s website.

Valve kicked off the Steam Winter 2015 Sale this morning. Steam is a gaming service and marketplace not all that dissimilar from Sony’s Xbox Live and Sony’s PlayStation Network. The service includes the largest and most successfully PC games store ever.  To take advantage of the Steam Winter 2015 sale all gamers need is a Steam account and a Mac, Windows PC or Linux to play their new games on. 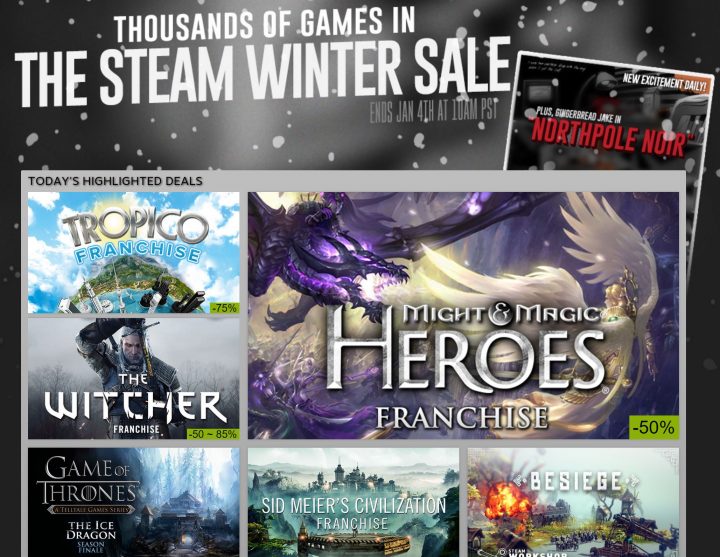 Cities Skylines, what is considered by nearly everyone to be the best city-building simulation in years, is just $11.99. Valve is offering different deals every day until the sale ends on January 4th I seems. Today’s highlights include deals on the Might & Magic, Besiege, The Elder Scrolls, Killing Foot, and Metal Gear of Solid, Civilization, Game of Thrones, The Witcher and Tropico franchises.

Thousands of different PC games are on sale. Those that buy something during the Steam Winter 2015 Sale get three Steam trading cards each day. There’s also a free comic book to celebrate the occasion. For quick purchases, Steam also offers prepaid cards at many retail outlets. These prepaid cards can be redeemed online so that users don’t have to attach their credit card to their Steam account. This also means that shoppers can gift friends and family credit to use in the Steam Winter 2015 sale.

Steam shoppers are encouraged to check each game’s specific requirements before they purchase a game through the service. Some titles might have higher requirements than what their PC can provide.

Valve plans to wrap up the savings on January 4th.