Crazy Taxi, a hit game in the arcade and on SEGA’s Dreamcast console, has made its way to Apple’s App Store and is now available for iPhone and iPad owners in Australia with a worldwide launch likely coming soon.

Earlier this week, SEGA revealed that it would be porting the game over to iOS with a release or iPhone and iPad owners sometime in October. It looks like the company made good on its promise and Crazy Taxi for iPhone and iPad is now available for download for those who are living Down Under.

As of right now, the game isn’t on the App Store in the United States though we imagine that the software will be pushed through to the App Store soon, likely at some point today. For now though, Australian iPhone and iPad owners can snag the game for a mere $5.49. We’re not sure if that will be the same price as the U.S. version. 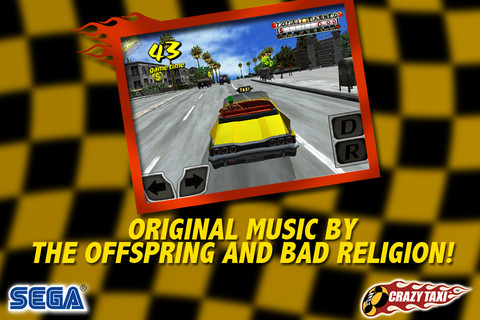 Crazy Taxi is now available for the iPhone and iPad.

The game looks to be an exact port of the original game which puts users behind the wheel of a taxi cab traveling around a city picking up fare after fare in a race against the clock. With tons of hills, jumps, and cars blocking the path, Crazy Taxi is a difficult but highly addicting game that will likely have users coming back for more. And more. And more.

In addition to its highly addictive gameplay, the game features the original soundtrack that features songs by The Offspring and Bad Religion. Other features that SEGA has included in the port are:

That last part is key because it means iPhone owners can purchase the game and play it on their iPad. It’s also nice that SEGA has included an option to listen to custom music rather than the soundtrack provided.

The game was fantastic on the Dreamcast and in the Arcade and we hope it’s just as good on the iPhone and iPad. We’ll be back with a full review once we’re able to get our hands on it.