Creating a Wallpaper that Works in Portrait and Landscape

I was in Seattle recently for the MVP Summit and I had a little time to look around the city. While I was there one of the sites I visited was the first ever Starbucks, which is located near Pike Place Market.

I took this photo of Starbucks Ground Zero. 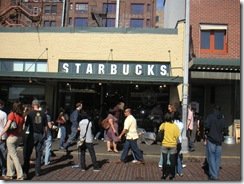 Between the Ray Ozzie and Steve Ballmer keynotes I knocked up a new wallpaper with a distinctly Seattle feel to it to commemorate the trip.  I have a little trick for making a wallpaper that works in both portrait and landscape.  This is basically to size the image so that it is smaller than the desktop so that it sits nicely in the middle and does not distort when you rotate into portrait mode.  To make this work you need to ensure that width of the image is less than or equal to the short side of the screen.  For instance on my Lenovo X60 I run at 1440×1050 – so the target size will be such that the top edge of the photo above would be 1050 pixels wide.

This means that, when the image is centered it will be positioned like this on the desktop.

OK, the scale may not be perfect, but you get the idea.  Now if you left it like that it would look a bit lame.  The trick is to blend in with the background.

For this particular wallpaper I though a black and white effect would be good.  My Lenovo is my work provided tablet and it only really has software I use for work installed.  The only decent image editing application I had installed was the SnagIt Editor.  I opened the original image in the SnagIt Editor and converted the image to grayscale.

Next I selected Edge Effects and selected Fade Edge.  I set the background color to black and then applied the fade effect to all four edges. 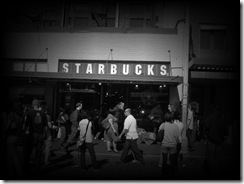 As I said before the trick making this work is to blend in with the background.  The desktop background, that is.  So first I set the image as the wallpaper ensuring that it is set to center the image, then I click on the Change background color link and set that to black. 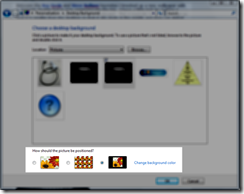 The finished effect looks good in both landscape… 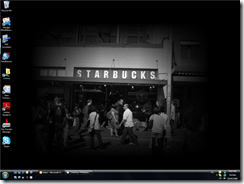 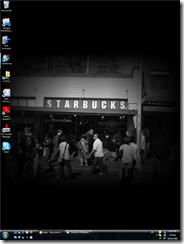