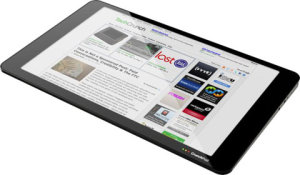 From The New York Times Bits Blog comes a report that Mike ArringtonÂ will soonÂ spill the beans onÂ his CrunchPad web tablet in late July or early August. They’re reporting a price point of less than $300 and that it will go on sale “as soon as possible”. I translate that as $299 and “don’t hold your breath,” but that’s just me turning on my marketing-speak translator.

NoÂ new details on the device itselfÂ (still a slate that boots straight to web browsing), but an earlier report from the San Fransisco Business Times states Arrington formed a company called CrunchPad Inc,Â obviouslyÂ with the specific intent of buildingÂ the device, and has been spending most of his time focused on the CP.Â And he mentionsÂ factories that can “churn stuff out,” so it sounds like he’s geared up to move some product. I’m looking forward to seeing it.