It’s a big week for the mobile tech world. It’s a big week for Tablets. It’s a big week for Apple and Microsoft. New products. New directions. New stuff. And that’s all before next week’s Windows Phone 8 and Android announcements. Apple is presumably taking the wraps off of the iPad Mini (or whatever it will be called). Microsoft is rolling out Windows 8 and Surface RT at the end of the week. And while both companies have something new to offer to attract your dollars, in essence the roll outs and the reactions to them will be pretty predictable.

The folks at The Joy Of Tech have put up a funny and pretty accurate check list for tomorrow’s Apple event. You should check out the entire thing here. I hope by now you know that what Apple announces tomorrow will change everything and also change nothing. Well, who knows what it will change or whether it will change anything, but within seconds of the event being over you will see pronouncements that parrot, parody, and poo-poo whatever Apple announces. And they will tell us that everything has changed and nothing has changed. The ghost of Steve Jobs will make many appearances. Yes, there will be superlatives and hyperbole, much of which we’ve already heard over and over. And of course, you will hear over and over again how Microsoft, Google, and Amazon can’t compete with whatever Apple announces. And you will need to touch it for yourself.

Much of what we will hear tomorrow will center on two points. The first is price point. Too high is some estimation and Apple will fail. Come in under $300 and the rest of the players should all pack it up. The other aspect will be the feature set. Will the smaller iPad be a generation behind the current version in regards to processor, display, connectivity, etc…

Oh, yeah, and there might be refresh of the new iPad, which may end up not being the new iPad anymore. If this is true, look for lots of angry early adopters to scream about this within seconds of such an announcement.

And finally, Apple looks to announce some other things as well regarding its hardware and software lineup. 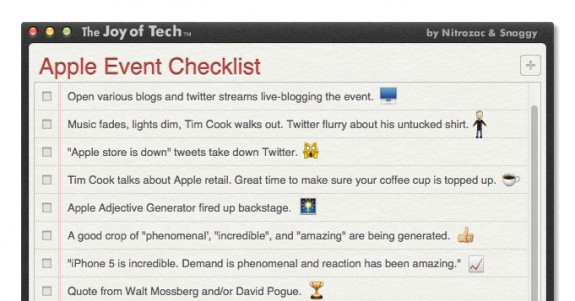 As for Microsoft and Surface RT, I want you to play along with me here. We’re supposed to start hearing from reviewers who got an early look at the Surface RT device some time Tuesday night. The early reactions then, and later this week. will say the following in various combinations about Surface RT:

As for Windows 8, many of those lines have already been written as well.

The bottom line in that we’ll have some major announcements of products and some early reactions that will keep us all talking for a few weeks or months until things settle out a bit, and we get an idea of who sold what during the holidays.