I met up with HTC last week in San Diego, California to take a look at the company’s next-generation HTC Titan, a Windows Phone 7 device that’s coming to the U.S. market to carrier AT&T pre-loaded with Mango and is a nice successor to the HTC HD7S.

The Titan is–as is befitting of its name–a large smartphone with a 4.7-inch touchscreen smartphone, which is 0.2 inches larger than the already stout Samsung Galaxy S II variants for Sprint and T-Mobile USA. However, with an evolution in what’s considered traditional HTC industrial design, the slimness of the phone coupled with the nice build quality makes the device very manageable and the phone doesn’t feel all that large at all. Unlike newer higher resolution Android smartphones with qHD resolution, the WVGA resolution display, spread over an even larger 4.7-inch screen, is actually quite crisp and sharp. The screen is among the best I’ve seen with great colors, wide viewing angles, and lots of contrast. 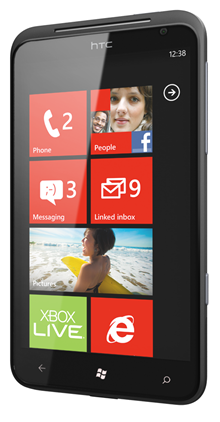 What’s really unique about the HTC Titan is that the device feels like it has a unibody aluminum enclosure, but when I had asked HTC reps on hand, they told me it is actually a plastic body with a unibody design that’s been treated to feel like metal. Whatever engineering marvel HTC had accomplished with the materials to construct the shell of the phone, it genuinely feels solid and feels sturdy like a metal frame. However, with plastic, HTC managed to get the phone light while also helping reception as metal isn’t too kind to wireless radios.

Beyond the hardware and industrial design, HTC also managed to inject some of its own DNA into the Windows Phone 7 Mango smartphone, which is a task worth noting as Microsoft implemented stringent control over Windows Phone 7 as to not mar the Metro UI on the phone with too many carrier or manufacturer customizations. That said, HTC ported its recent work with cameras–like that from the myTouch 4G Slide–to the HTC Titan along with the HTC Hub, and HTC Watch for video rentals.