Last week, at CTIA, Navigon announced that it is the first company to bring an on-board turn-by-turn navigation solution to Microsoft’s Windows Phone 7 Mango platform. While sister company had announced a Garmin app and rival TeleNav has offered a voice-guided navigation solution in the past for Windows Phone, Navigon’s solution doesn’t require an active Internet connection and maps are locally stored on the device for quick access.

The benefits of locally-stored maps are two-fold, though they do require over 1.5 GB of storage for the maps and apps on the device. The first benefit is that you can navigate in areas where there isn’t cellular reception and will still be able to get accurate routing information. Secondly, with tiered, throttled, and finite metered data plans, locally stored maps won’t eat into your monthly data allocation. 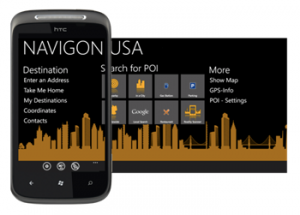 Navigon really worked on the UI for Navigon for Windows Phone Mango. With the app, it appears that the company didn’t just merely port the Android or iOS app to Windows Phone, but rather took into consideration Windows Phone’s user experience in mind to create a native-feeling app. Navigon utilizes a panoramic app home screen, and according to the company, you can even pin destinations as a Live Tile on the Metro UI home screen of Windows Phone Mango for quick navigation. This way, you can quickly navigate home, for example, without even having to open the app first, enter in an address, and then start navigating.

The app is currently available in Windows Phone Marketplace for just $30, a promotion price through November 15 for the U.S. map. Navigon U.S. costs $50 normally. You do need to be on a Windows Phone 7 device with Mango installed to load Navigon.