We’ve certainly seen touch screens and digital ink in the recent poltical coverage of the US primaries and I guess you could argue that the infamous Telestrators that have been used in sports coverage for quite some time use digital Ink as well. CTitanic posted a shot from the current NBC Olympic coverage where he says he’s spotted some digital Ink. I’m not sure if this is more than the usual Telestrator coverage as I didn’t see it, but given the advances we’ve seen in TV coverage of other events I’m wondering if this is something new. 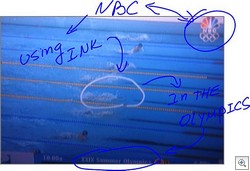 Frankly, I don’t have much time to watch the Olympics, so if anyone does see anything that looks like and advance in the technology, let us know in the comments.