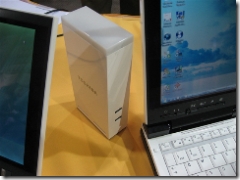 The things you can learn from the GottaBeMobile.com forums.

JDRAdvisors, a GBM reader and a Toshiba Authorized Reseller, recently learned that the innovative Toshiba R400 UWB Wireless Dock, announced in January during CES 2007, will finally be released around June 22.

JDRAdvisors also alerted our readers that, based on a conversation he had with a Sr. Systems Engineer from Toshiba , the Wireless Docking Station will not be compatible with current Toshiba R400 Tablet PCs. Obviously, this did not sit well with current owners, and it certainly raised a red flag with us, as it was the first time we can recall hearing about incompatibilities. So, we went straight to Toshiba to get some clarity on this apparently new information.

Here is what our Toshiba contact, Michael Bingham, has told us regarding the compatability issue:

We are sorry for any disappointment that this news may have caused, but we invite you to review the PortÃƒÂ©gÃƒÂ© R400 press release for greater clarification regarding this product launch. We would like to thank you for your continued support of Toshiba and its products.”

Here is the wording from the press release, dated January 7, 2007:

With the PortÃƒÂ©gÃƒÂ© R400, Toshiba is announcing the world’s first wirelessly dockable notebook computer. This seamless approach eliminates the daily hassle of connecting and disconnecting peripherals and delivers the convenience and simplicity that mobile users demand. Through the integration of Ultra Wide Band (UWB) technology with wireless digital video capabilities, the PortÃƒÂ©gÃƒÂ© R400 docking experience is designed specifically for desktop use and can automatically connect when the notebook comes within proximity of the Toshiba Wireless Port Replicator. The Toshiba Wireless Port Replicator will be compatible with new PortÃƒÂ©gÃƒÂ© R400 modelsÃ¢â‚¬”both products are targeted for availability in the second quarter of 2007 (bold added by GBM )

Coming out of CES, the Wireless Docking Station was one of the major “WOW” features of the R400 and resulted in driving a lot of interest in the new tablet pc. No one on the GBM team heard or understood, based on literature we read and people we spoke with, that 1st quarter R400’s would not be compatible with the Wireless Docking Station, but it sure is right there in the press release for us all to see.

During Dennis’ interview with Kevin Roberts, Toshiba’s Product Manager for the R400, the incompatibility issue was never raised. We never knew to ask about it, and Mr. Roberts never brought it up. In our opinion, Toshiba could have done a much better job of educating potential buyers of this issue. Relying on that one sentence statement, in a press release, isn’t enough to drive home the point to potential buyers of this very expensive tablet pc. To be honest, that statement wasn’t very clear, either. At the time of the press release, the R400 was new, and the way that statement reads, it appears that the Wireless Dock would be compatible with the new R400. In addition, in one part of the press release, it states that the R400 would be available in the first quarter. In another part, it states the R400 would be available in the second quarter. Quite confusing to say the least.