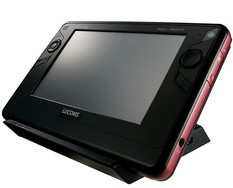 Looks like another UMPC/Origami for the Far East market, the Solo M1 from Daewoo Lucoms looks on the surface very much like the Founder UMPC, (rebrand?) which we haven’t heard much about lately and the specs also look very similar, except the Solo has a DMB TV Tuner and a S-video out on a cradle. (Anyone else here in the US a bit envious of the fact that we don’t have the DMB TV or similar spec? Just asking.)