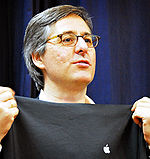 Dan Lyons is famous for blogging as Fake Steve Jobs. Those wacky parody posts, usually filled with as much invective as insight are great stops for laughs and scathing silliness. He also writes for Newsweek as himself. This week he gives us his take on the promise of the Apple Tablet, which he calls the iTablet. Tablet PC users won’t find anything new in his visions of what the iTablet could bring about. Lyons’ take on the potential for change an iTablet could bring sounds very much like the original vision of Tablet PCs that many of us fell in love with a few years back. So, his Newsweek piece serves as a mass media gentle reminder of the promise that has been lingering around that seems to have every one so excited.

I think I’m much more interested in what Fake Steve has to say.