Microsoft bills the Data Sense feature as a way to “get the most out of your data plan.”

The Data Sense system compresses every webpage out of the box, without asking users to turn on settings or control what is and isn’t compressed. Microsoft claims this compression delivers “45% more web browsing on the same data plan.” 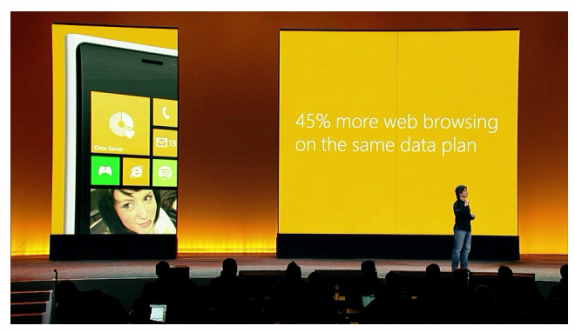 During the demo, Joe Belfiore, the manager of the manager of the Windows Phone Program at Microsoft, said that this helps cut data use across popular sites and even helps with Facebook pages and updates, but it’s not clear if this works inside apps.

The biggest benefits of Data Sense will likely come in browsing the web, but the tool can also help users find WiFi and understand what apps are using the most data. 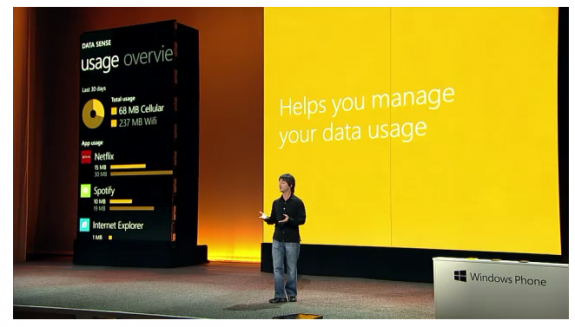 See which apps use the most data with Data Sense.

In addition to compressing webpages, the Data Sense Live Tile helps users understand where they are using data and which apps are the biggest users of data. This system beats iPhone and Android devices which only track data used, not the apps that are using the data.

By tapping through, users can see how much data is left on a data plan and the remaining days until the data limit resets. There is a notification for users that approach the data limit, so users can upgrade to a new data plan or switch to WiFi. 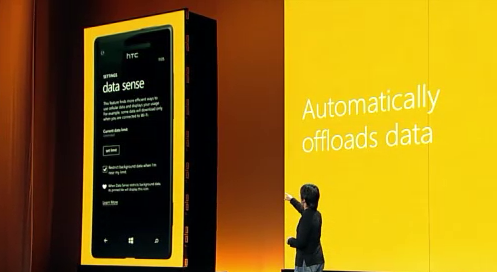 Check data plan limits and the time til it resets.

Data Sense understands the need for WiFi to avoid going over data limits and includes a WiFi Finder to help locate WiFi networks nearby.

Data Sense works with carriers, rather than around them. Verizon is the first carrier to roll out support for Data Sense, with other carrier partners coming in 2013.