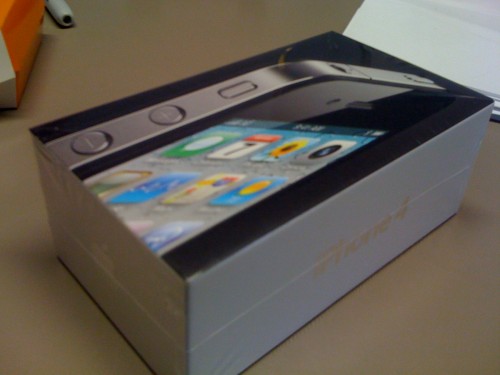 As you may have read once or thrice, I was on the early list to get an iPhone 4 today. What you probably don’t know are the series of coincidences that set me off on a brief adventure where I seek the key to activation, meet up with an Evernoter, and discover the fang pit. It all happens in a story I call Day Zero Hijinks with my iPhone 4.

The first domino to fall was an out-of-town trip that displaced an appointment with the dentist on Monday, which got rescheduled for today. Then, after eating some mystical cake last week Tuesday, I was whisked away into the iPhone 4 pre-order queue and snagged a first day delivery. Could I get any luckier? Actually, I could and did; my delivery was bumped up a day to today. Then after reading the Evernote blog entry on their iOS4 update, I noticed one of their meetups was scheduled right here in Reston on, that’s right, today, right after my dentist appointment at the time I’d eat lunch. The alignment of events seemed too good to be true.

Okay, so yeah, obviously the alignment of events was too good to be true. My iPhone 4 arrived on time this morning, hand delivered to me at my desk. Unfortunately, for whatever reason, the activation process from iTunes on my Tablet PC simply did not take. Eventually I called AT&T tech support to make sure my account was in order. They activated my new SIM remotely, but the iTunes activation process still wouldn’t take, so I left for the dentist without activating my new phone and with my old phone now deactivated.

Not a big deal though. My dentist is five minutes away, and I wouldn’t be taking any calls during the visit anyway. Have one cavity in case you’re interested.

Back track to right before my old iPhone was deactivated, I got a notice from the organizer of the Evernote meetup. She had to deal with an emergency and wouldn’t be there, but encouraged the rest of us to still go. I might have skipped it entirely if it wasn’t being held at Cosi, which is in the Reston Town Center along with both an AT&T store and an Apple Store.

So the new plan at this point was to hit the meetup then stop at one of those stores to see if they could work any magic. Naturally, that plan didn’t quite work out either. I took a wrong turn and wound up near the stores first. Being a couple minutes early, I popped in to AT&T to see what they could do. Short answer: nothing. The guy at the desk didn’t even know iPhone 4s were already being delivered. He called his manager to see if he was allowed to activate it, who said yes, so he plugged in my iPhone 4 only to find he didn’t have iTunes 9.2 installed. Lesson: if you’re picking up at an AT&T store (or probably any non-Apple Store), call ahead to make sure they have iTunes 9.2 installed on their computers.

Next stop was the Apple Store to see if they could do anything. The genius I talked to was excited to see the new iPhone, though I commented she’d probably be less excited tomorrow when she’s up to her elbows in them, and like magic, my iPhone 4 was activated in three minutes. I don’t know how to explain it. She just plugged it into their Macbook and it worked.

After that I hustled over to Cosi to see if anyone was still there, and there actually was one guy there and he had a Tablet PC! Joel has been an Evernote user since version 2.2, which he had up and running on his HP Touchsmart tx2. He unfortunately had to leave early, while I arrived late, so we had a very narrow window to chit-chat. I showed him Egretlist for Evernote-sync’d checklists. He showed me a notebook of PDFs he scanned in. We talked a bit about what we liked and don’t like in Evernote and went off on a few short tangents, like mindmapping. Really wish we could have discussed things in a less hurried manner. Seemed really nice and hopefully he’ll be there if our organizer schedules a re-do.

While day zero with my iPhone 4 didn’t go exactly as planned, I must say, the convergence of events worked out at the end. Hopefully I showed the AT&T store that they need to get iTunes 9.2 installed, like, right now. I met a fellow Evernote and Tablet PC user and introduced him to GottaBeMobile. Oh, and my iPhone 4 is activated and finished its sync while I was eating lunch. Day Zero Hijinks with my iPhone 4 rock!