T-Mobile has been attempting to shake things up in the mobile market in the last year or so, introducing no-frills service plans and enticing deals to get people to switch from a competing carrier. Its biggest thing is offering no contracts on any of its plans, meaning that customers will have to pony up the full cost of a smartphone, but they won’t be tied into a contract and the monthly bill is cheaper than a typical on-contract plan.

More recently, T-Mobile announced that it would give customers up to $650 to switch from a competing carrier, with some of that money even going towards paying for the early termination fees that you’ll inevitably receive. That’s quite a deal, and I’m all for the Uncarrier’s off-contract service plans, but there’s only one thing that’s keeping me from switching: Coverage.

When I’m picking a carrier, the most important feature to me is coverage. I need to be able to get LTE in all of the places that I spend the most time at. Naturally, Verizon fills this need. It has LTE plastered in Fort Wayne, IN, which is my current residency, and it also has ample coverage up near the Goshen, IN area where all of my immediate family live. Plus, Verizon even has super-fast LTE in the middle of nowhere in Pennsylvania where my wife’s family lives, which is quite impressive.

I’m currently paying $160 per month for two smartphone lines that have unlimited talk and text with 2GB of shared data. It’s certainly not the best deal around — I can get a similar plan on T-Mobile for a lot cheaper. For example, with the current plan I have on Verizon, I’ll be paying $3,840 over a two-year period just for the service, whereas I’d only be paying $2,160 for two years of T-Mobile service. Granted, I’d be paying full price for the smartphones, but that still puts me ahead.

However, while T-Mobile has LTE coverage in Fort Wayne, it’s pretty spotty, and going anywhere outside the city takes you farther away from decent coverage. Furthermore, good T-Mobile coverage where my family lives is pretty much non-existent. Granted, I don’t actually live in that area, but when I’m away from home, I’m usually with my family up in northern Indiana. 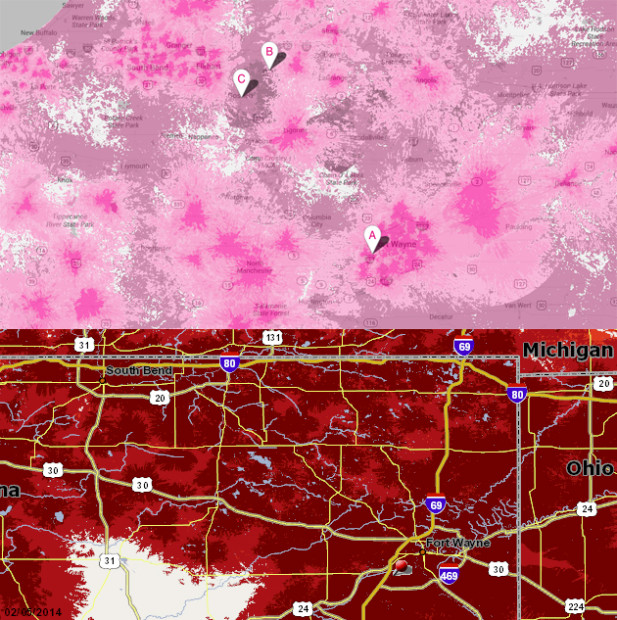 While T-Mobile does have excellent LTE coverage in almost all of the major cities, I rarely travel to such places. Indianapolis is the closest big city to me, and the last time I was there was over a year ago, so if there’s a place where I need coverage, it’s not in the bigger cities, but rather in rural areas outside of Fort Wayne, usually.

I really like how T-Mobile is shaking things up in the mobile industry, and I admire its tenacity, but until its coverage matches Verizon’s coverage, they won’t get me to switch. Yes, I’m paying a lot more per month with Verizon, but I feel that I’m paying the extra premium for better coverage and more areas that have LTE available. Heck, even out in the middle of nowhere in Pennsylvania Verizon has super-fast LTE at my disposal, and that’s terrific.