It’s been almost a week since iOS 7 has released, and tons of iPhone and iPad users have already downloaded and installed the new update on their devices. The first thing you might have noticed was the completely new look, but Apple says that much of the user interface experience remains the same. However, some features have changed slightly, causing a lot of veteran iOS users to learn new tricks.

When deleting specific iMessages and text messages in iOS 6 and older, you just simply tapped on the Edit button in the top-right corner and selected the messages you wanted to delete. In iOS 7, it’s a bit different and a little more confusing to get to. However, we’ll show you how to do that in order to get rid of those embarrassing messages on your phone. 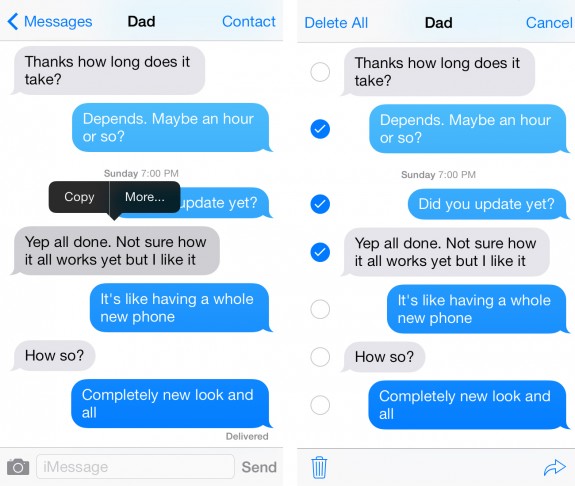 To delete a particular iMessage or text message, open up the Messages app if you haven’t already done so, and tap on a conversation. Now, tap and hold on a specific message in the conversation that you want to delete and a pop-up menu will appear allowing you to copy the text or choose more options. Tap on More…

This will bring up circles to the left of every message in the conversation, and a checkmark will automatically appear in the specific message that you tapped and held on. You can select more messages if you want my tapping on the circles next the each message. Once you have all of the messages selected that you want to delete, tap on the trash can icon in the bottom-left corner. A pop-up will appear confirming the action; tap Delete Message to complete the deletion. 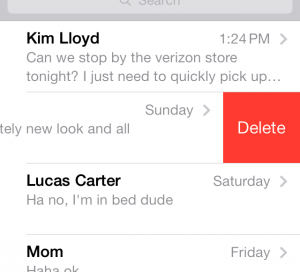 If you simply just want to delete an entire conversation, there are a couple ways of doing that. You can either open up the Messages app where it shows you a list of conversations you’re having with contacts, and then swipe to the left on one of them. A big, red delete button will pop up, and you’ll just tap on that to delete that conversation.