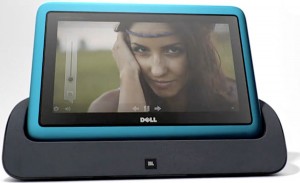 If you were concerned about Warner’s split personality with his ‘Should I get a tablet or not‘ post this morning, Dell really feels your pain. The device, which was shown off earlier at IDF this year, has now gotten its own teaser video courtesy of Dell, which shows the duo-personality netbook/tablet hybrid. With ChangeWave’s recently released stating that tablets are now cannibalizing netbook demand, we’re wondering how the Inspiron Duo will factor into that report as the device has the innards of a traditional netbook, but thanks to its unique swiveling display, it looks seamless like a tablet when in tablet mode. Previous convertible tablet models have rotating screens so they look a bit more clunkier compared to the minimalist Inspiron Duo.

According to Engadget, the tablet angle is really played up here, and it shows with Dell really showing the tablet mode with an integrated speaker dock from JBL.