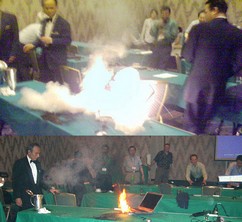 Yikes! We all know about heat issues associated with mobile computers of all types including Tablet PCs. Apple has even stopped calling laptops laptops after scalding a few laps along the way with some of their newer machines. But this raises the temperature on that discussion. Apparently a Dell Laptop burst into flames at a conference in Japan. (If this had been a Tablet PC we’d never hear the end of it.)

Interesting that some of the commentary is already saying that it is only a matter of time before this happens on a plane. Watch for that to turn into an unfortunate discusssion of banning laptops on a plane. In the meantime, I understand that the new Windows Mobile and Tailored PC Division is looking into pants equipped with fire retardant.

Via Gizmodo and The Inquirer