Following news that the Dell Latitude ST is on the way comes a marketing video from Dell showing the advantages of this Windows 7 slate. No surprise, it’s not targeted at consumers. 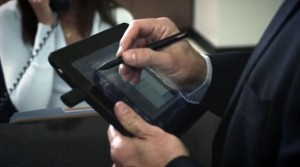 Not a whole lot of detail shown in the video, nor does it add much spec-wise over previous leaks. What it does is describe usage scenarios, including business, medical, and education (the usual Tablet PC target markets), and the features that make it well-suited for them. They make a point of showing off the business-class features of the slate, including built-in security, USB and SD card ports, HDMI-out, and desktop docking. Pen input is regrettably described as “stylus support”, which under-appreciates the active pen input it provides.

The video opens with a mention of Intel Atom processor, which does not confirm the Oak Trail rumor but rules out the other rumor of Intel Core i5. That’s disappointing but not surprising. Intel Atom Oak Trail runs cool (and slow) enough to run on a fanless system (without additional cooling considerations), while other Intel processors, including previous Atom versions, do not. If the ST was engineered without ventilation, it would be tough to swap in a more powerful processor than Oak Trail.